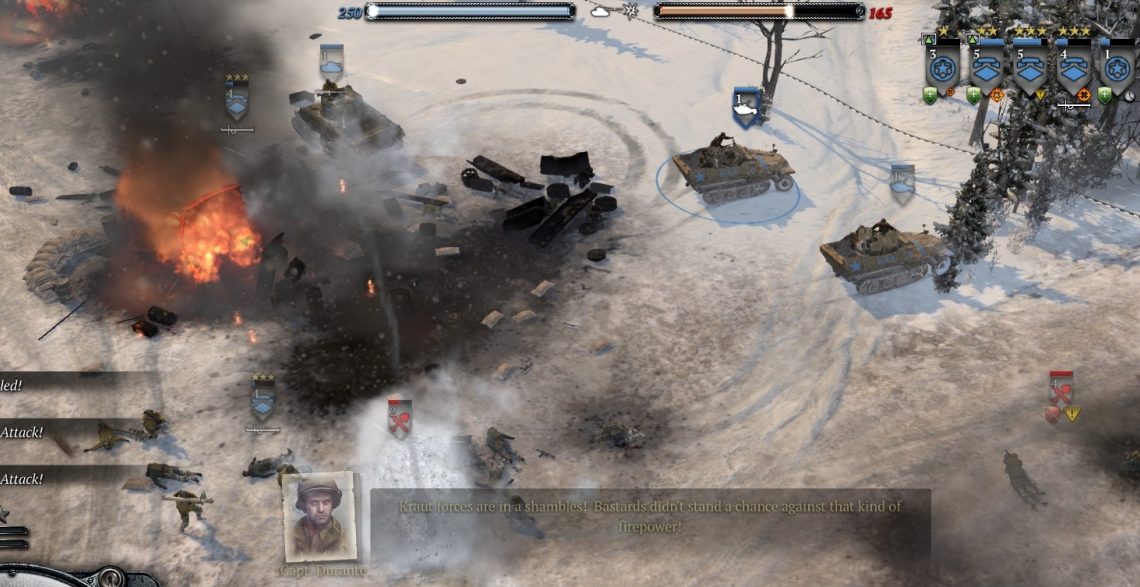 I think Ardennes Assault is mostly an improvement over the earlier COH2 stuff, and deservedly is often referred to as COH3. But the Tank Grab mission comes close to ruining it.

Victory in “Tank Grab” is won not by holding territory or even by killing German units, but by the completely unreal achievement of killing German units with your vehicles only. I guess it’s the kind of thing you end up with if you decide to depart from simulating war and instead construct a highly artificial, rule-bound, sport-like contest.

Anyway, in principle you win “Tank Grab” by refueling and recrewing lots of vehicles that are lying around the map, and using these captured vehicles to kill German vehicles—and the more plentiful German infantry. Points are deducted from the German score every time you make a kill.

In practice, the mission is a misconceived, unbalanced, basically broken mess. On difficulty levels 1 and 2, you often run out of targets and have to base-rush to end the mission. On difficulty levels 3 and up, you’ll face heavy German armor (e.g., Tiger Ausf B, which can shoot through multiple buildings halfway across the map) as well as extremely AT-capable German infantry—on those levels anything other than Rangers may be annihilated, and even Rangers may take heavy casualties.

“Medals will be awarded based on how quickly you win the mission” is the vague medals condition noted at the start, but it is untrue. You can win quickly, in fact most quickly, with a base-rush, but if you do that you’ll be penalized with a bronze medal. I have won gold, I think on difficulty level 2, using a vet-2 Baker Co., but it cost them a lot of casualties. Rangers are a natural choice for this but they seem to be nerfed in the scoring so that they cannot win gold on this mission, ever—a basically flawless mission for them will win only silver, and anything less than that will win bronze.

My advice if you’re going to play this mission is just to use Rangers and do a base-rush asap, to get it over with. Better yet, find a game whose developers care more about their product.