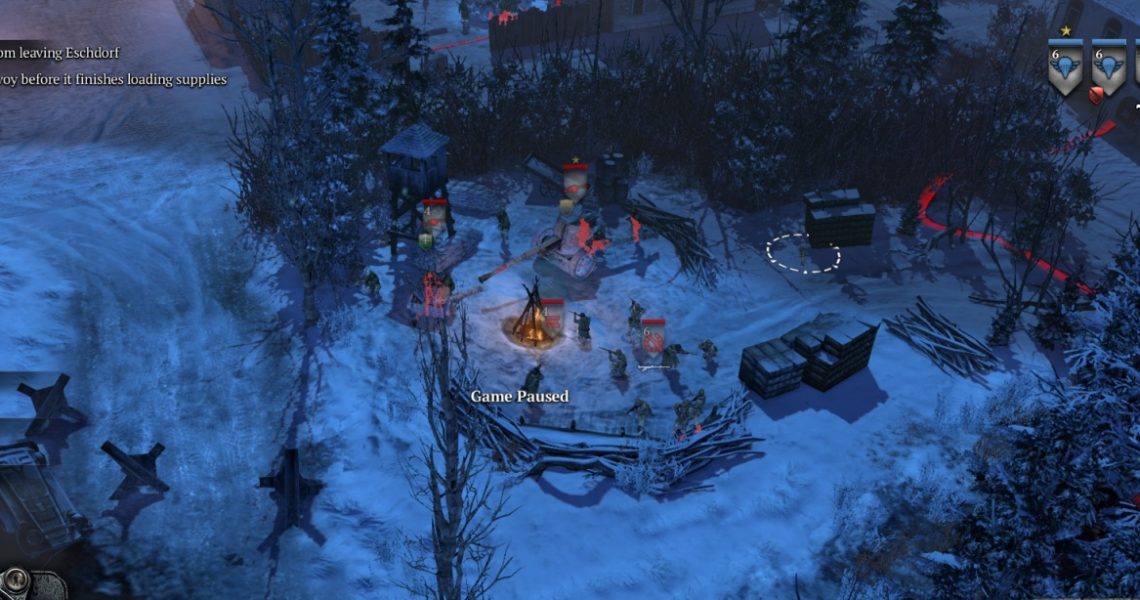 Fox Co.’s Ranger squads are expensive in manpower points but come with Thompson submachine guns and can be upgraded with bazookas or panzerschrecks as well as other abilities to make them the most powerful unit in the game. The big negative for Fox (though I have not seen this described, let alone quantified, anywhere) is that, when upgraded with bazookas or schrecks, it accumulates experience more slowly per kill than the other companies. So if you are using Fox and want to maximize your experience level and campaign score (see below), you should delay upgrades until later in the campaign, and draw out battles where possible, instead of ending them quickly. Ouren, Stavelot, and Tank Grab usually are good opportunities for Fox to build up lots of experience points.

The other three companies have squads that are very weak at the outset of each mission, compared to German units. Un-upgraded airborne squads, for example, will be wiped swiftly even by sturmpios in simple squad vs. squad combat. In general, all initially available squads, except Fox Co.’s Rangers, cannot fight effectively until they are outfitted with weapons such as BARs and bazookas and supported by HMGs and AT guns. The less experience these companies have, the fewer units they will start with on each mission, so the weaker they will be.

Dog is suitable for most defensive battles, has good AT-artillery, and has amazingly powerful anti-personnel artillery when fully upgraded.

Baker has good halftrack-mounted infantry, which can come with BARs, if you can afford to wait until you reach 2 command points, and they have cheap late-game armor support (8 CP) that costs no fuel.

Able’s airborne units are usually upgradable with Thompsons or LMGs, but they are relatively fragile, and lack of early-game anti-vehicle capability will be fatal for them on some missions. Able’s big advantage is that they can drop anywhere on the map, though often will take casualties, especially in crowded environments or if there are enemy units in the drop zone.

You fight each mission with one company, but normally on the strategic map you will use the other companies to cut off escape routes for the Germans being attacked on that mission. If you don’t do that, some of the German forces that survive the battle will flee to nearby German positions, making the difficulty levels higher at those positions. In some circumstances, you might want to deliberately make missions harder so that your experience accumulation will be greater. But difficulty levels 3, 4, and 5 are all very challenging, and on level 5 even an experienced player who always wins can sometimes take dozens of casualties doing so.

Due to the limitations of contemporary coding, and maybe of the devs’ competence, the AI is at a significant disadvantage against a human-brained opponent, if all else is equal. So of course, pretty much everything else is unequal. This bias is mainly embodied in the German units and their superior hardiness and weaponry. But there are other “cheats,” the biggest (and least-discussed) one being the unreal visibility limit that is frequently imposed on the human player and prevents his HMGs, AT guns, and other units from auto-firing in the presence of a German unit, even when the German unit can fire at his units. This visibility cheat may be in the form of ordinary “fog of war” or it may be presented as smoke/dust from battle. Be ready for it, in any case.

There are bugs, including: