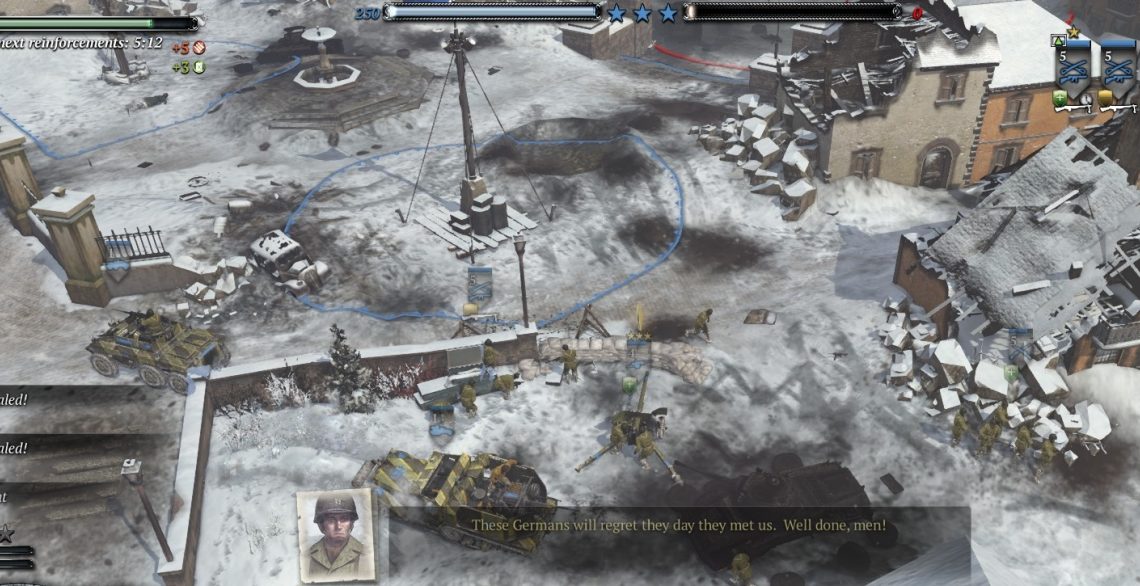 You start (depending on your vet level) with at least an AT gun, an RE squad, and two lightly armored scout vehicles. You reduce the German score in the normal way, by holding at least two out of the three VPs—but also by killing their vehicles (10 points per kill).

This mission can be super-challenging—IRL it would be considered an absurd suicide mission—because the Germans usually bring Pumas, flak-halftracks, Ostwinds, Panzer IVs, and StuGs, starting almost immediately, before you can have anything more AT-capable than your unvetted AT gun (which responds very slowly). The Germans sometimes also bring a lot of indirect fire (mortar halftracks and Walking Stukas) to kill whatever AT capability you do have. And their infantry are plentiful and frequently schreck-equipped. Using Rangers (Fox Co.) with schrecks or bazookas is in principle the least difficult way to get this one, but my experience is that choosing Rangers causes the CPU to be more aggressive and to give itself more countervailing advantages. In other words, you might face an easier mission if you choose another company instead.

Regardless of what company you choose, a strategy that works is to use your starting units, including vehicles, to try to cap at least two and maybe all three VPs immediately, to drain the German point total quickly, then build up defenses at the most central and contested VP (or a VP that effectively stands in the way of another) and start building a strong defense of a second VP as soon as you can—and always go for the third one asap to hasten the German point drain. AT power is key, but you may be able to win quickly just by keeping your starting AT gun crewed, and keeping your bazooka-wielding M20 crew alive and shooting, while holding three VPs.

If you use Rangers and they have schrecks or bazookas, make just Ranger squads—every other unit, including most of your armored vehicles, may be overwhelmed by what the Germans bring to this. But with Baker Co., for example, I have won quickly and with minimal casualties using just the starting squads, a couple of non-upgraded rifle squads, and a couple of cav riflemen call-ins. I ignored all non-VP points, never used munitions, never used fuel. Placement of the AT gun in cover behind a low wall/sandbags was key. It is always prudent to get more AT power if you can, though.

Mid-game you’ll get another useless light armored car or two, and maybe a flak-halftrack which is also extremely vulnerable to German fire. Late-game you might get more light armored crap plus a Sherman. If you’ve done this right, you’ll win long before you get the Sherman.

The gold medal condition is score-based but vague—probably you need an ending score above 230-40. I know 248 and 250 work, and 250 is not very difficult. Just make sure you always have at least two VPs!

Note that there is a Pak-43 placed randomly near one of the VPs, and obviously it can help if you crew it and are capable of defending it. What tends to happen is that, if you crew it, German vehicles give it a wide berth and any point in the immediate vicinity comes under attack less often and only by infantry. On some maps, though, it doesn’t make sense to concentrate your defense near that Pak-43 so you may want to just capture it and destroy it.