For this final, epic battle you will need to have your Army Organization level all the way up to 10 so that you can bring 5 corps. 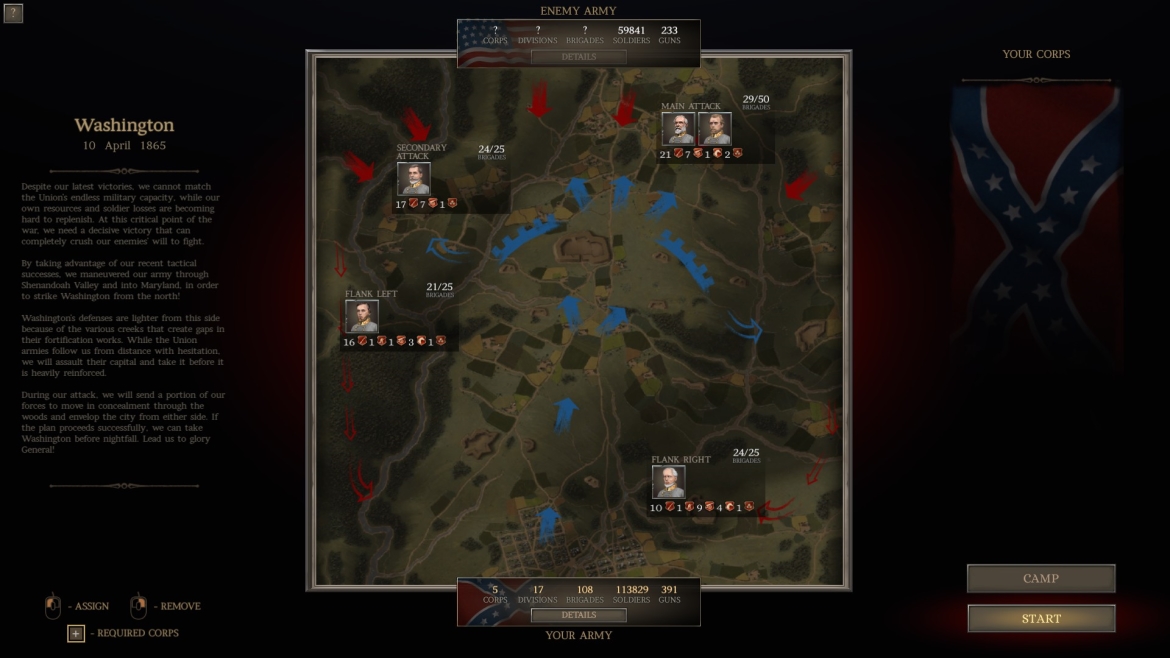 One strong corps, which should have good infantry and at least a few solid artillery units, plus one or two strong cav units, will start at the NW of the northern map and take nearby Fort DeRussy. It will then spread out to the S and E to sweep the Federals down to the nearby creek.

Another strong corps, with a similar makeup, will start at the top of the northern map and envelop the central Fort Stevens position, mainly curling around to the east and then pushing west—essentially driving the Federals south of Fort Stevens (they can only go south because they will be blocked to the west by your first corps). 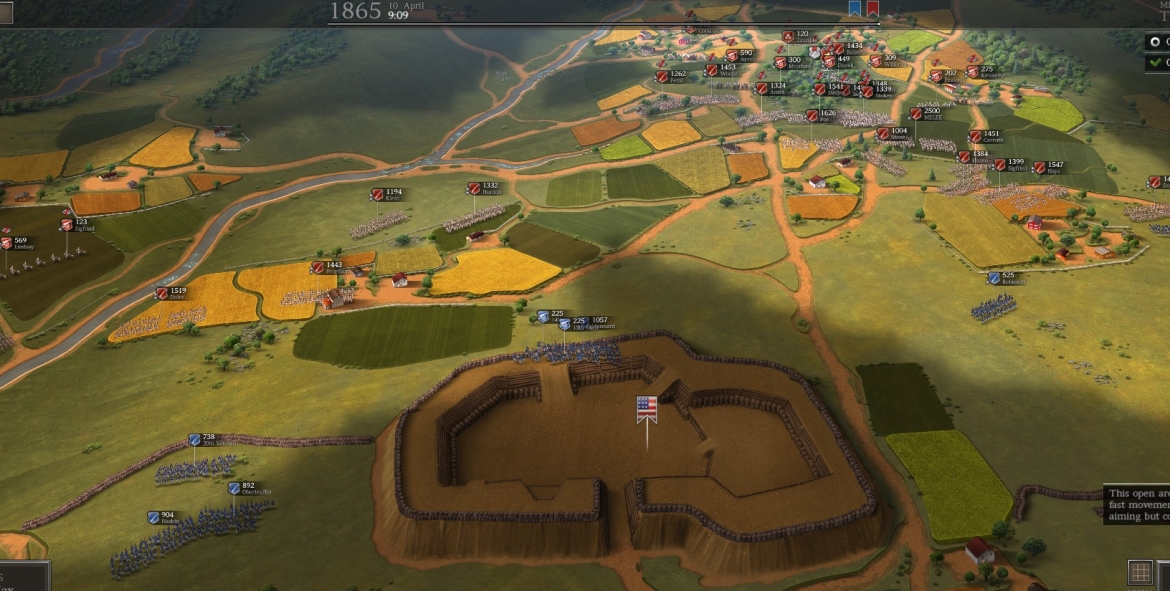 For this task you will also bring a third CSA corps which you don’t really need and can be your weakest, with just a few units. This “weak” corps, with help from elements of your second corps if necessary, will also go down to the SE corner of the northern map to take Ft. Slocum.

Note that any units from the aforementioned three corps that are near the bottom edge of the map when the phase ends and the focus shifts to the southern map will appear at the top of the new map—they can be very useful to you.

Your fourth corps will appear at the west edge of the southern map when the focus shifts to that arena of battle. This should be a reasonably strong corps, mostly infantry with some cav. However, it cannot cross the Potomac River (?) and climb the steep bank on the Washington side without huge casualties, so keep its units where they first appear, out of the Federals’ sight, for most of this first day (offensive phase) of the Washington battle. This corps is not strictly needed for this battle and it is good to preserve it for the next day’s battle.

Your last corps should be, after the first two described above, your strongest. It will come in from the NE corner of the southern map and should envelop the nearby fort (“Fort Thomas”) from the N and E and push west, eventually crossing the map to take the fort (“Fort Washington”) at the NW corner of this southern map, as well as the Washington flag itself.

Note that in the late afternoon/evening of this day 1 battle the map will open up so that some of your northern-map units can come down and help on the southern map. At this point, assuming you’ve eliminated the Union defenses in their way, your fourth corps, stranded all day on the W bank of the Potomac, can cross over and join the party.

For the day 2 battle, CSA, having taken Washington, defends the city and the five forts against a large Union attacking force.

On the northern map, on day 2, the main attack will come at Fort DeRussy and will involve a lot of artillery. A strategy that always works well for me is to defend at Fort DeRussy with a half-corps or less, put most of the rest of my available forces on this map into fortifications against attacks from W and N, and then, over time, execute two big flanking maneuvers: 1) swing out west from the area just south of Ft. Stevens to crush the Federal units creeping up south of Ft. DeRussy; 2) swing out north and west from Ft. Slocum and the east-Ft.-Stevens fortifications and sweep the Union units across the map to the west, ultimately into one big encirclement/annihilation above Ft. DeRussy. 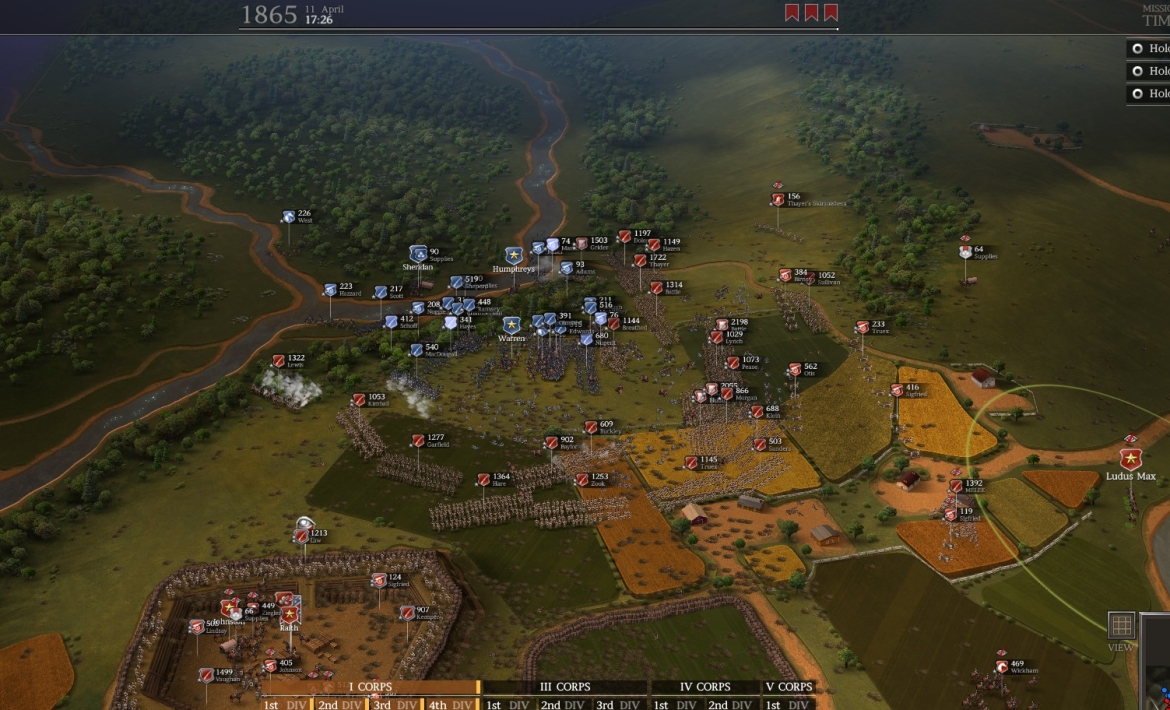 Note that late on this day 2 battle the Union will send in one last corps from the SW corner of the northern map. If you have completed the annihilation of the Union forces above Ft. DeRussy you should have no problem defending that fort—but in that case the Union units in that last-ditch corps (which may amount only to a division or two) may try to cross the map to attack Ft. Stevens or Ft. Slocum. Just be sure you can block them before they get to their target, or meet them with an adequate defense.

On the southern map on day 2, the defenses overlooking the Potomac on the west side of the map are very important—you can totally crush the Union’s attack from this side—but the entrenchments/breastworks are bugged so will require lots of attention and micro. 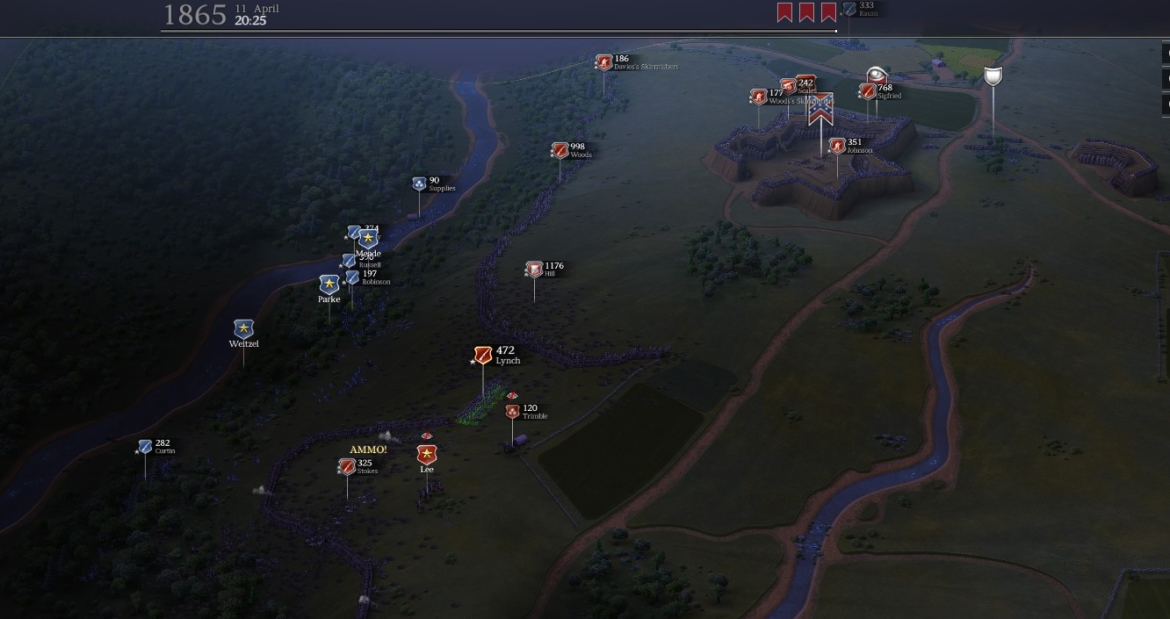 Also, you will need to devote some infantry and artillery to Ft. Thomas at the NE corner of the southern map, where another big attack will take place (from the same direction you attacked the day before). 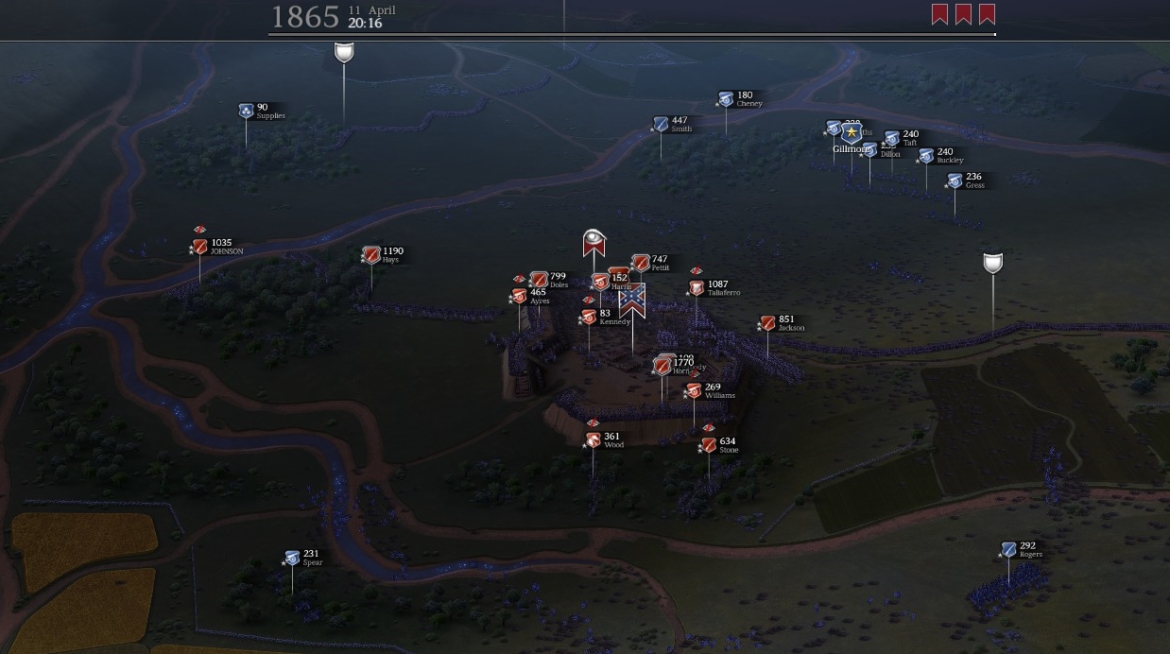 On the southern map, as the day 2 battle wears on, and the Union army you’re fighting loses troops and becomes less threatening, peel off CSA units to defend the flag in Washington. Union forces will come up from the bottom edge of the map near the end of the day, to try to take the city that way. You will need at least half a dozen brigades plus artillery to stop them—anyway be ready to hustle units to that defense from your other sectors. 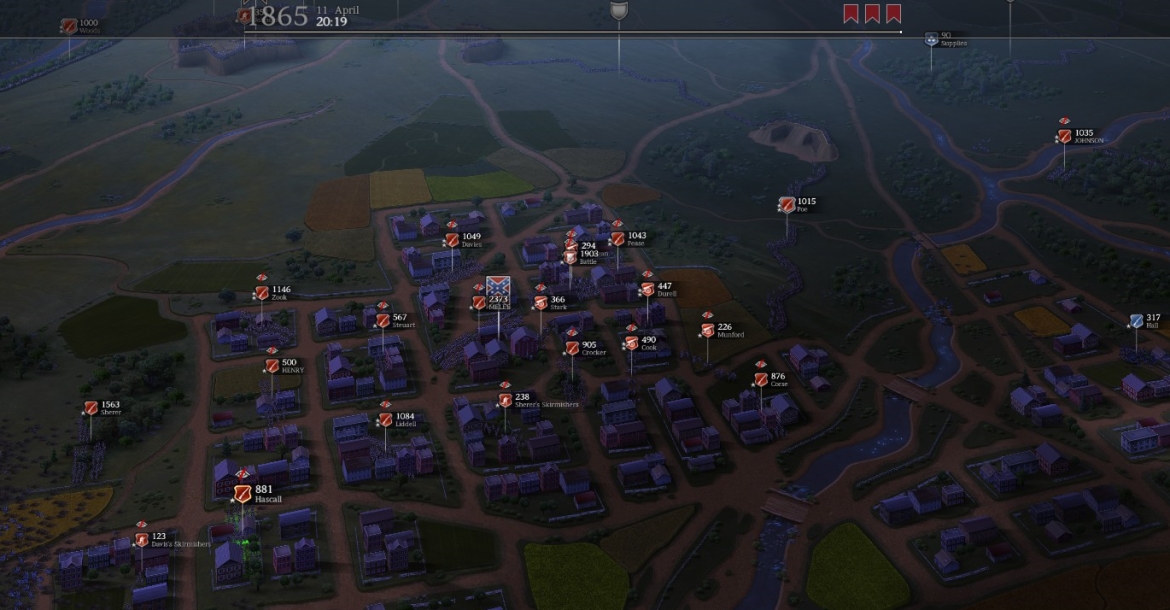 Overall, this Battle of Washington is not that difficult to conduct, provided that you have planned it out beforehand and have an adequate force. If you can bring an army of about 100K and have been doing a good job of inflicting casualties on the Union in the battles leading up to this one, it should be a breeze. 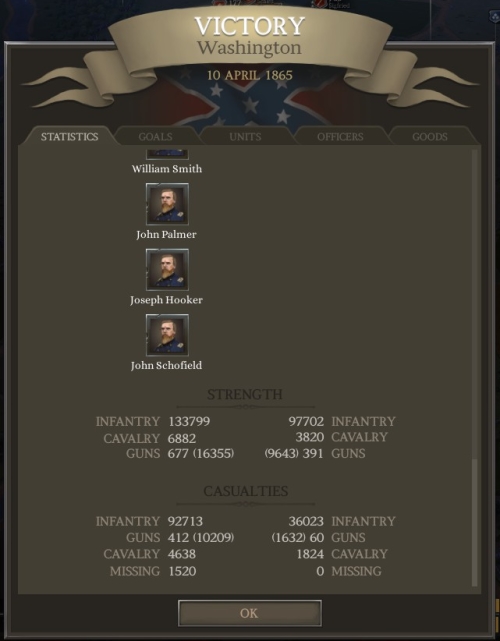 On the campaign victory page you can find stats on how many casualties your troops suffered and how many you caused the Union. If you have been following an annihilation strategy, you should have inflicted many more casualties than the roughly 600,000 Union killed/wounded/captured IRL. 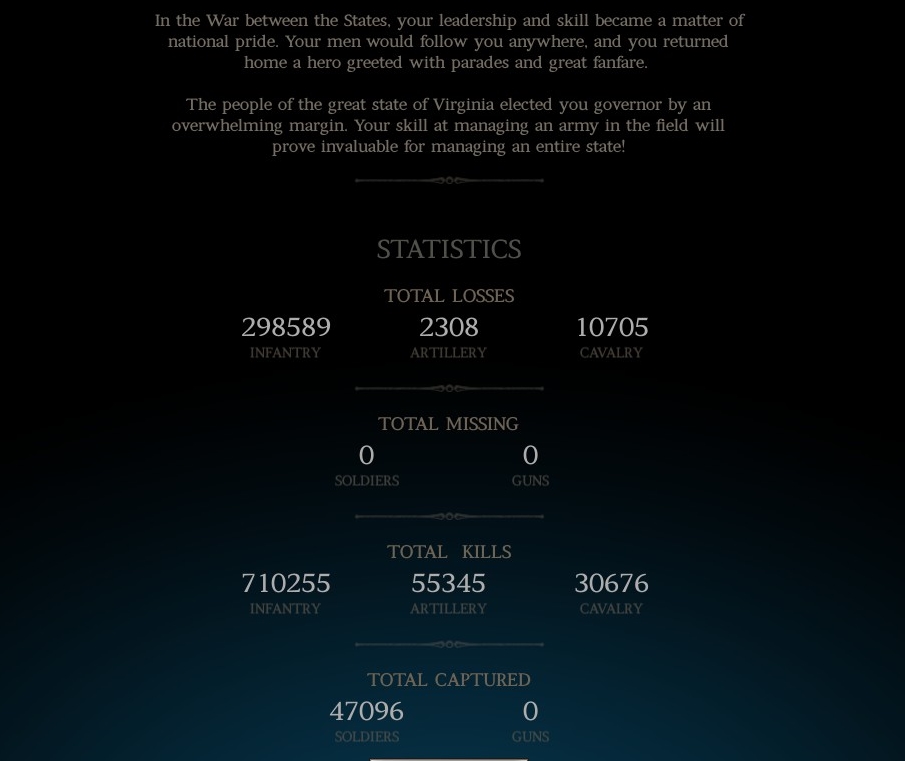 When you complete this campaign, you are officially permitted to whistle, hum, or sing “Dixie.”