This is one of the most challenging battles for CSA on BG level. The CSA, to win, must advance and take two different positions from a larger, artillery-heavy, and heavily entrenched/fortified Union force in one day. It is not especially hard to win the battle, but is almost impossible to do so while keeping casualties below 10K. I say that having tried probably a dozen different strategies, including flank-from-the-west, flank-from-the-northwest, flank-from-the east, and hide-all-day-then-charge.

You can bring a 24-unit corps, which arrives in dribs and drabs and is reinforced late in the day by a 10-unit corps (of which you get just 9 units). Your first corps probably would benefit from having at least a couple of strong artillery units, but artillery is not essential. Cav is not very useful on this highly forested map, although the Union will have large (~1,000-man) cav units and you will need to use skirmishers to protect your flanks and rear.

Start by running your starting brigades up the road to the nearest/southernmost flag area (Saunders Farm). Take the flag, but more importantly do what you can to seize the woods north and northwest of it. 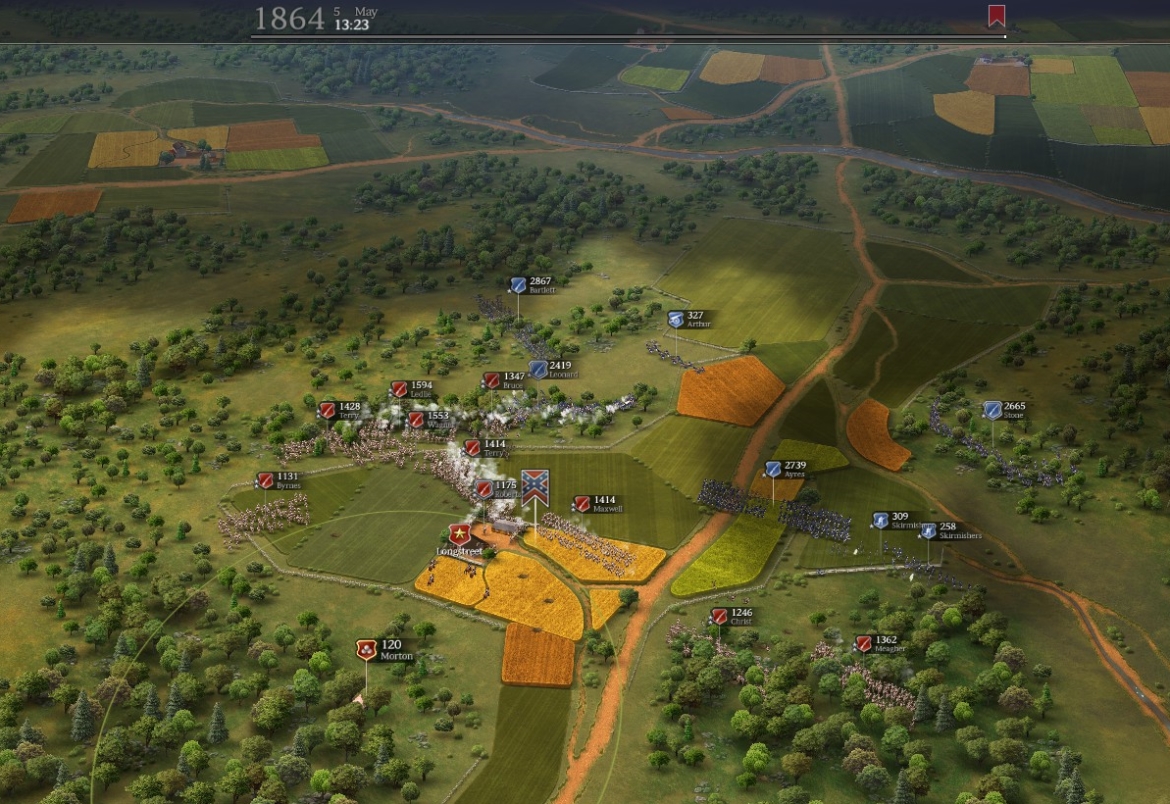 As reinforcements come in, beef up your right flank a bit but mostly add to your left flank, and protect from cav attacks. Form a strong defensive position and stay in it—you will deal heavy casualties to the Union this way—until late afternoon (>1530) when the nine units from your reinforcing corps arrive from the bottom of the map. 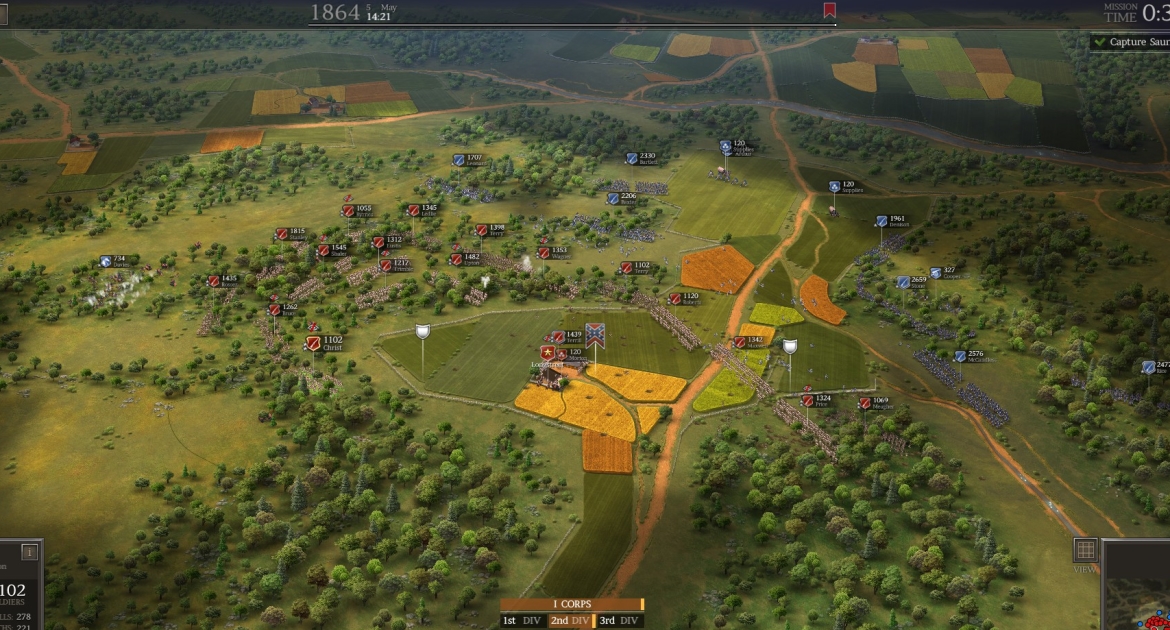 When you have your entire force present and rested, extend your left and use that extension to start flanking the Union to the west of the upper flag (Saunders Field). Try to extend most of the way to the top of the map and sweep the Federals east, and then start enclosing their Saunders Field defenses from the north. (Note that they usually have >20K men in the woods to the southeast of the upper flag.) 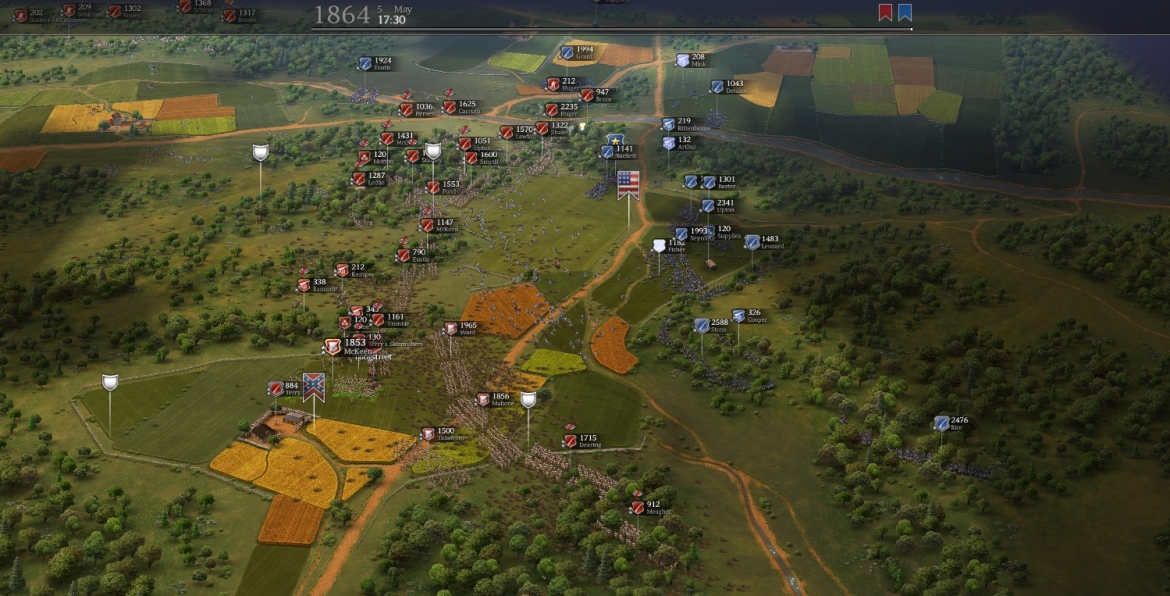 At 1800 the main timer will expire, but you can keep fighting for a few more hours. At any propitious point before 2000 or so, take the upper flag, and either press Finish as soon as the contested timer is running, or let it run to zero if you want to keep fighting and maximize Union casualties. 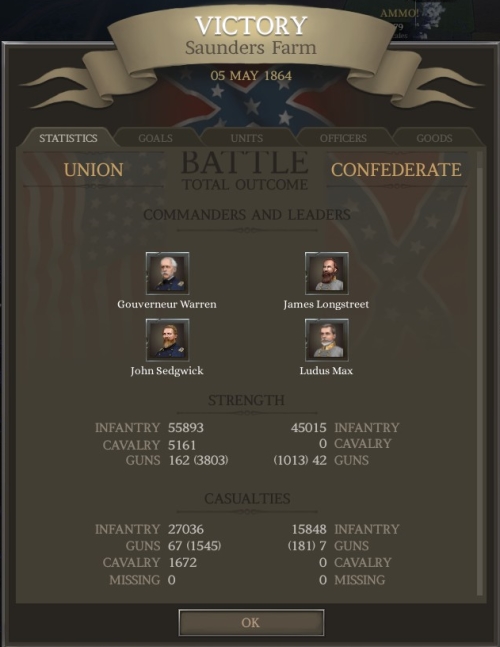