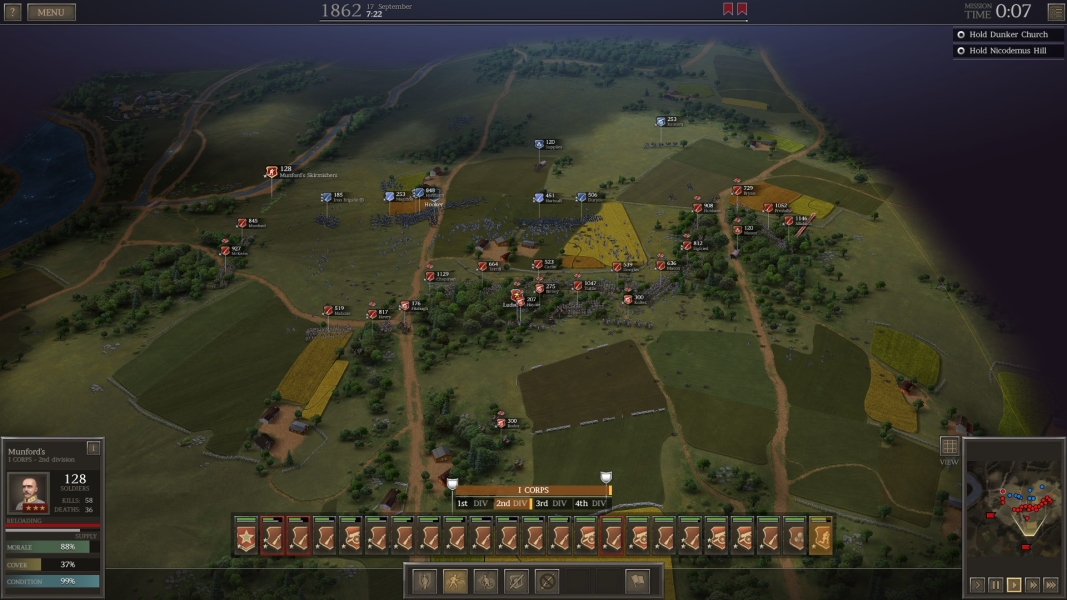 This is one of the most overrated games I’ve encountered. The devs included Nick Thomadis, who started out as a TotalWar modder (Darthmods) and somehow built quite a following that way. Thomadis seems to have had a harder time building finished wargames. His first stab at that, Ultimate General: Gettysburg, came out in 2014 and was riddled with problems. Many of those problems either haven’t been fixed, or haven’t been fixed properly, in UGCW.

Most of UGCW’s problems are at the battle-fighting level and include deficiences in the modeling of unit movement, firing rate, flanking sensitivity, friendly fire effects, kill rates, terrain line-of-sight effects, routing behavior, and fortifications—plus the usual shortcomings of the AI adversary. But the most noticeable problem is the let-down at the strategic, campaign level. Which is to say: there really isn’t a strategic, campaign level. UGCW is really a fixed set of Civil War battles that you can re-fight with the original armies on each side, or fight with a more or less fake strategic layer pasted on. There is no freedom to take your armies, TotalWar-style, wherever you choose in the USA of the 1860s. You are constrained to refight Civil War battles at their actual locations and in their historical order, except at the end where there are non-historical war-ending battles such as the CSA-campaign’s Battle for Washington.

You essentially must win every battle you fight—any loss, however slight or technical, may be enough to terminate your entire campaign—and there is no early exit except through defeat. There is also no political or “national morale” dimension to the game. Playing as CSA you can cause 40-90% casualties to the Union in most battles, with zero effect in shortening the course of the “war.” Obviously if CSA had won such crushing victories more than a few times in a row in real life, Union troops would have deserted in large numbers, new recruitments would have been impossible, and the war would have ended in a peace treaty and southern secession within a year or two.

Note that playing the historical battles, with the historical units (I haven’t checked the accuracy), outside of the “campaign,” is reasonably diverting. The problem, though, as with so many “AI”-driven single-player games, is that once you learn the ropes you will trounce the enemy every time, no matter the battle or what side you play.

I recommend UGCW mainly for educational purposes. I don’t find it very interesting or replayable. I do think, though, that it usefully highlights a need for a US Civil War game on a grand scale. The technology to do that on a mass-consumer platform might not exist for some time. But, my God, if you could model the terrain of 1860s USA, the politics, the diplomacy, the chaotic battles, the spying and intrigue, etc.—you could get lost in it and never come back.