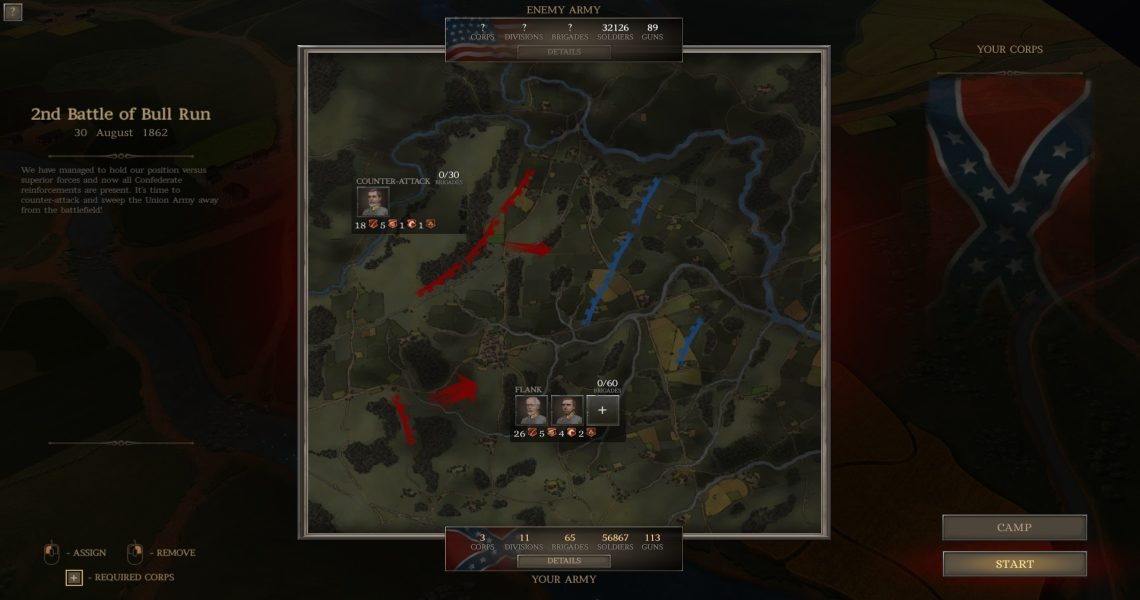 When you set up for a campaign you must first make some choices that define your baseline characteristics as a general officer.

These choices ostensibly relate to your training, your connections, etc., and may have important effects on how you fare in the early battles.

Once you know how to play, you can make these initial choices randomly and still win. Also, after every battle you can use your experience points to increase your scores on one or more of these measures. Anyway here is a quick guide to what the terms mean:

Politics. A higher number means more money (for buying weapons and hiring officers) and more men after every battle. This is generally the most popular thing to maximize, although, due to the automatic scaling that happens in the campaign battles, some players (including many of the better ones) deliberately use smaller armies and thus have little use for maximizing manpower.

Army organization. Army can be larger (# men per brigade, # brigades per division, # divisions per corps, # of corps). Always check ahead for the # of brigades you can bring to the next battles, and plan well ahead for Grand Battles that require multiple-corps armies.

Medicine. More casualties return to their units after a battle.

Logistics. Unit supply levels (not counting your supply wagons) start out higher in each battle.

The game scales the Union opponent based on the CSA force size, so it isn’t necessarily wise to build a huge CSA army. Also, building a huge army costs more in weapons and maintaining troop quality and involves larger losses per battle. I prefer to stick with brigades that are no more than 800 men in size, early in the game, expanding to 1,000 or so for Shiloh, and 1,200+ for Antietam and beyond. While I don’t use nearly as much artillery as the Union does—if I did, I’d have no slots left for infantry—I like to bring, per corps, 4 to 6 batteries of medium/heavy guns (10 to 24-lb) to grand battles so they can be concentrated on single targets, e.g., charging or in fortifications, to rout them reliably at range.

Your first goal for Army Organization (AO) level is to reach level 6 by Shiloh so you can bring 20 brigades to that battle—that means in the battles from Potomac Fort to Shiloh you’ll use most or all of your victory experience points to increase AO, depending on your AO level at the start of the campaign. You’ll also want level 9 by 2nd Bull Run (24 brigades per corps), and level 10 (five corps) for the last battle at Washington.

It isn’t always possible, but in each battle you should consider if there is a way to encircle and annihilate the Union force without incurring excessive CSA casualties. If you don’t do this at all, the overall Union army will keep getting larger, battle after battle, and may become too difficult to beat in some battles.

Cover is extremely important. Standing on open ground and being fired upon by an enemy in cover is the worst situation you can be in.

Flanking is also extremely important. Two small brigades can usually defeat a much larger one by using one brigade to pin the enemy brigade and the other to fire into its flanks. The AI in this game is not very good at defending against this basic tactic (which, e.g., would involve retreating slightly so you don’t get flanked).

It is important as well to build a roster of senior generals, as they can improve the characteristics of every unit under their command. Every battle in which a general’s corps fights adds to his experience level, and you should be able to have four lieutenant generals (including Lee and Johnston) by the Washington battle.

Units cannot “run” far without tiring and losing their efficiency. In some situations you have no choice but to run them, but always, if possible, let exhausted units rest before committing them to battle.

It can be tempting to spend your reputation points for more money, weapons, or men, and once you get close to the ceiling of 100 points you might as well spend them. But it’s also good to keep your reputation point level reasonably high throughout the campaign, because that gives your units a nice morale boost—which can make a real difference in tough battles.

Union army size will go down based on casualties you cause, but reinforcements will bring the resulting total up by at least a few thousand after almost every battle. Moreover—this is important—if you’re in the mid to late campaign and your annihilation victories make the total Union army size go below 50K, the Union will immediately receive a large reinforcement of tens of thousands of new troops, sometimes even >100K. You might not care about this if your goal is to maximize total Union casualties/captured for the campaign, but otherwise you’ll want to pay close attention to this figure and time your aggressive battles accordingly. Most players will want to strike a balance between maximizing Union casualties and minimizing CSA casualties.

I don’t recommend doing the vanilla CSA campaign on Major General difficulty level, because it seems too unbalanced and unrealistic. What is likely to happen on MG is that you’ll suffer losses you can’t replace for a few battles in a row, and then you’ll run into a Grand Battle for which the Union has overwhelming numbers. I once started a campaign in which I trounced and often annihilated the Federals in every battle, but then found that at Frederickburg the Union had 90K troops while I had about 34K. I did fine at Marye’s Heights but was wiped out by two- and three-star Union brigades that outnumbered me 3 to 1 at Prospect Hill. There are balance-adjusting mods and most likely using one of them is the only satisfying way to play on MG level.

The battle guide that follows is meant for quick absorption and includes advice I consider “good enough” to get through the BG campaign. But there are other, more detailed guides out there, including the video playthroughs of “pandakraut” (https://www.youtube.com/channel/UCNe0tL4j0sTdKghbrYDPqiw) who is a veritable scholar of UGCW and has even made his own mod, the  popular J & P Rebalance Mod.

Speaking of that mod, my impression from a partial campaign playthrough is that for most or all CSA battles with that mod on BG level, one can use the same battle strategies I have outlined here for the vanilla game. The main differences between the mod (version 1.27.1a) and vanilla are that, with the mod, (1) CSA units move more slowly and lose more effectiveness from fatigue, (2) melee cav units can be much larger and can dominate battles if used correctly, and (3) Union infantry brigades are significantly buffed. I only did a partial campaign playthrough—through Antietam—because I found that the high power of melee cav with that mod (on BG level) made battles too easy to win.