The best way to win Chickamauga easily is to get the Union army size down as much as you can in preceding battles (e.g., Chancellorsville, Gettysburg, Siege of Jackson), so you won’t be heavily outnumbered.

You bring two 24-unit corps, one available on the first day of skirmishes and ford-crossings, the second joining the first on day 2. Note that on day 2 only the first three divisions (3 x 6 = 18 units) of your second corps arrives. The battle can go to day 3, but there is no need to let that happen.

Your first corps and second corps (day 1/2 divisions) should be virtually all infantry—no more than one or two cav and one or two artillery units.

You face the task of taking a bridge (Alexander’s bridge) that is guarded by well-equipped Union brigades. You will have the six units from your first corps’ first division. Bring these northwards through the woods to get closer to the bridge, but keep them out of sight. If you like, pop out a skirmisher unit to scope the defenses. Do not attack. 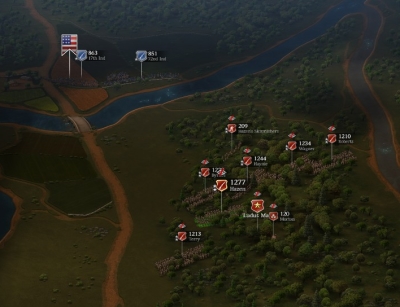 At 1730 four of your second-division brigades will arrive at the bridge (Reed’s Bridge) at the NE corner of the map. Be ready for this—they may be shot up badly if unattended. Bring them into the woods immediately to the NW of Reed’s Bridge, and, from within the woods, surround the Union fortifications as much as possible to flank the Union defenders, rout them, and push them to the west. Detach skirmishers if needed to rout Federal artillery, but otherwise do not pursue the Union units—try to stay in a solid defense line within the cover of the woods. 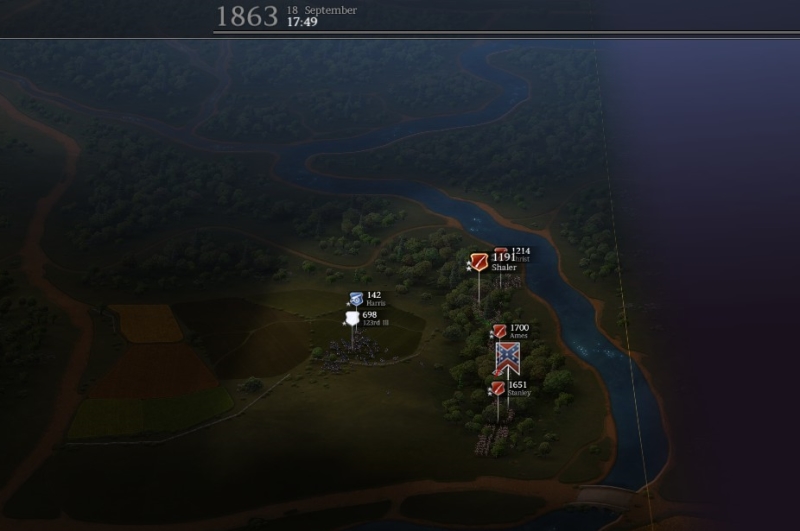 Around this time, four more CSA units will arrive further south, from the center of the eastern edge of the map. Bring them south to the rear of the Alexander’s Bridge defenses and have them rout the Union defenders from behind. Your first division, lurking in the woods to the south of the bridge, should attack across the bridge at the same time the defending units are being hit from the rear. 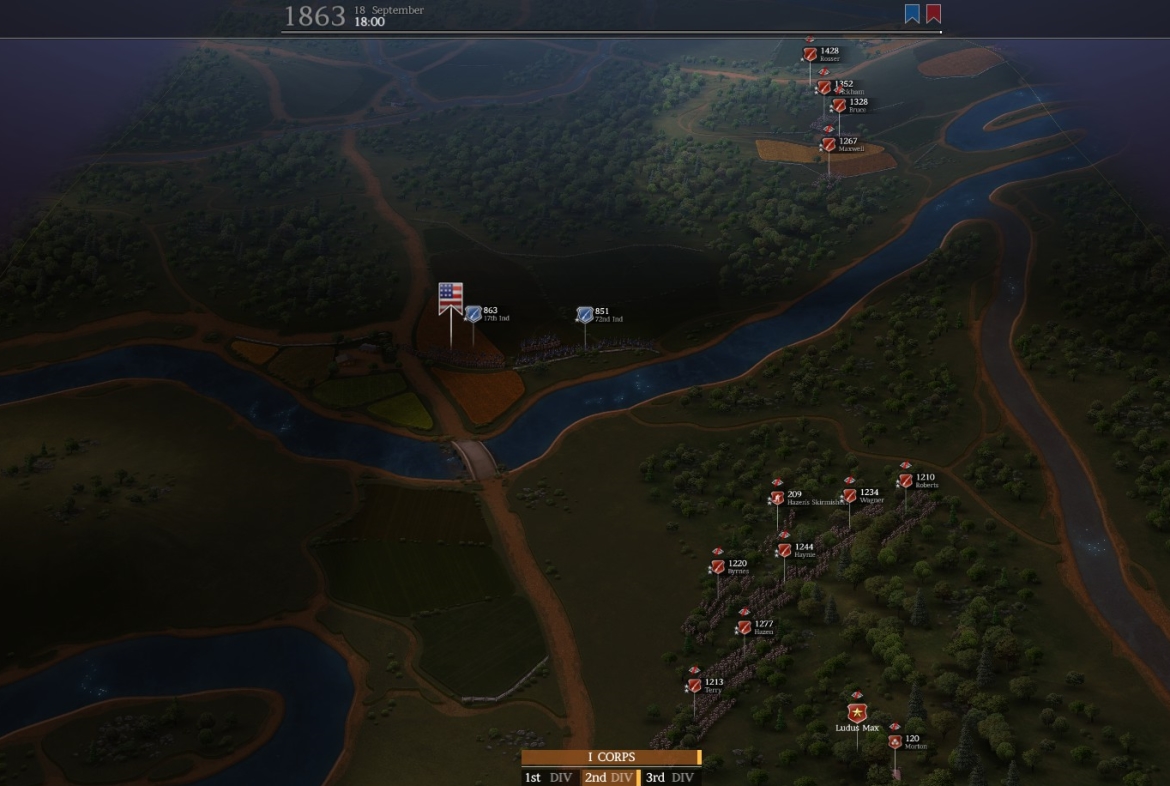 The Union units will rout to the west. Push them away from the vicinity of the bridge, then form a defensive line in the woods and get out of any positions where you are taking lots of casualties from skirmishers or artillery. Note that Union units on day 1 are often very well equipped with special weapons such as Spencer repeating rifles. CSA can incur thousands of casualties just in these initial skirmishes if it engages for too long.

Once Reed’s and Alexander’s bridges have been taken, or when you are more than 2 hours into the battle, you will be tasked with taking two lower river crossings. A half dozen brigades from your first-day corps will arrive, in two separate groups, at the bottom of the map for this purpose. Use them to charge the defenders at the right-side river crossing, set up a defensive perimeter, and then extend to the west to take the defenders at the second crossing from behind. Now just defend against sporadic Union attacks until the timer winds down. 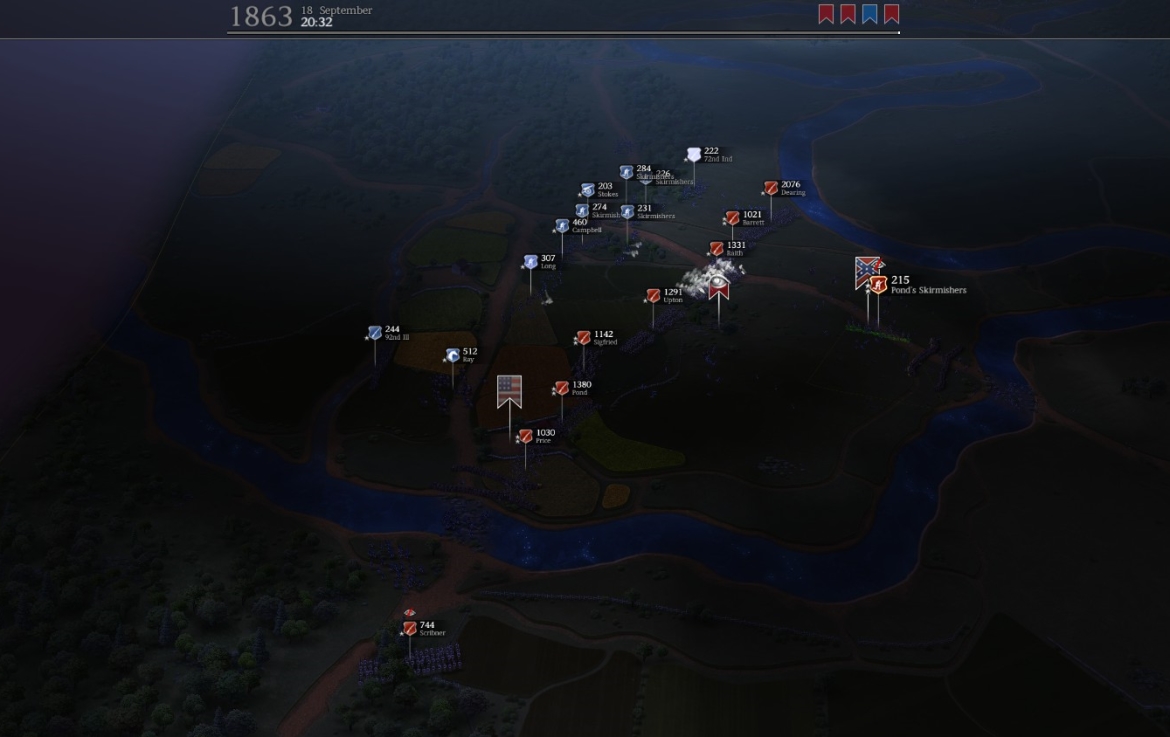 You can replace some of your losses in the camp UI before day 2.

On day two you will start at 0900 with 8 of your first-corps units around two flags at Brotherton Road and Jay’s Mill. Your goal on this day is to hold those two flags against Union attacks and, late in the day after CSA reinforcements arrive, take three out of the four flags along the La Fayette Rd. to the west. If you have achieved the victory conditions by 1830 you win the battle.

Four of your brigades should defend Jay’s Mill. Use woods and buildings for cover, not the fortifications at the flag. In case it wasn’t already obvious, fortifications generally are broken in this game—they are often, in effect, traps in which troops that try to use them will be easily flanked and routed. Keep your Jay’s Mill defenders well supplied. They won’t move much from this position until the very end of the battle. Union attacks will come mainly from the river crossing but also sometimes from the woods to the NW. Ignore seemingly isolated Union supply wagons that veer into view unless you have a cav unit that can snag them quickly.

The rest of your starting units should hunker down in the woods just south of the Brotherton Road flag, basically right at their starting box. The first few groups of reinforcements that come in from the bottom of the map should join these initial units to form a defense line in those woods, guarding especially from attacks from the N and W. 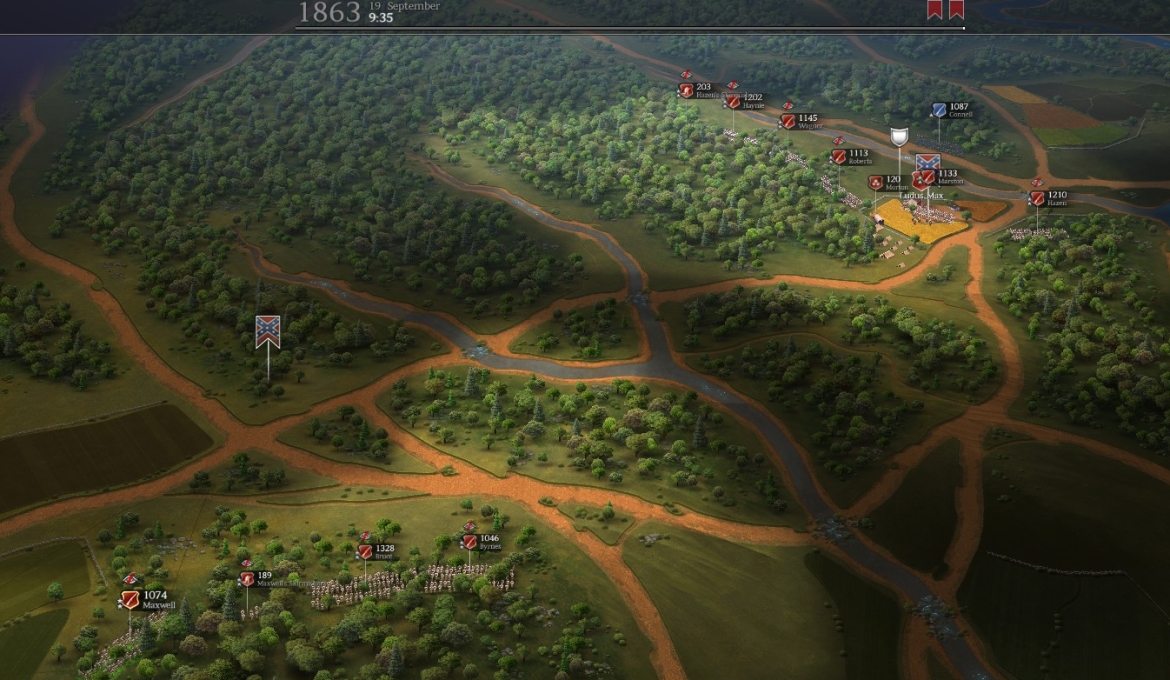 “We May Have a Chance to Break Their Defenses”: At 1200 you will get this message and the map will open up to the W and S, revealing the four Union-held flags along LaFayette Rd. From north down to south, they are Kelly Field, Brotherton Cabin, Viniard Field, and Lee & Gordon Mills. Some of your second corps units will be on the field to the south, and the rest will arrive from the bottom of the map shortly.

Put all but two of the new brigades into position to surge west and strike the Union Lafayette Road line at and around the Viniard Field flag. Place the other two brigades (from those arriving from the bottom of the map) in woods out of sight across the river from the Lee & Gordon Mills flag.

When your units east of Viniard Field are rested and ready, they should sweep in with overwhelming force, take the Viniard Field flag, and set up a perimeter to N and W to guard against counterattacks. One or two units can head south to take the Lee & Gordon Mills flag, with help from the two brigades waiting in the woods across the river from that flag. (You don’t really have to take the L&G flag to win, but doing that will increase the Union casualty count.)

When your units in the Viniard Field area are rested, they can sweep north to take the Brotherton Cabin flag, and can keep going north to take the Kelly Field flag and also start swinging east to flush Union brigades out of the woods to the east of the Lafayette Road. Once the latter action starts, the CSA forces that have been hunkered down all day in the woods south of the Brotherton Road flag can extend their line and push north. There should be a large, at least corps-size group of Union brigades in the woods just north of the Brotherton Road flag. Surround them as well as you can and annihilate. Some of your brigades that have been defending Jay’s Mill may be able to help. Keep enough units near your flags that Union cav can’t steal in and take them at the last minute. 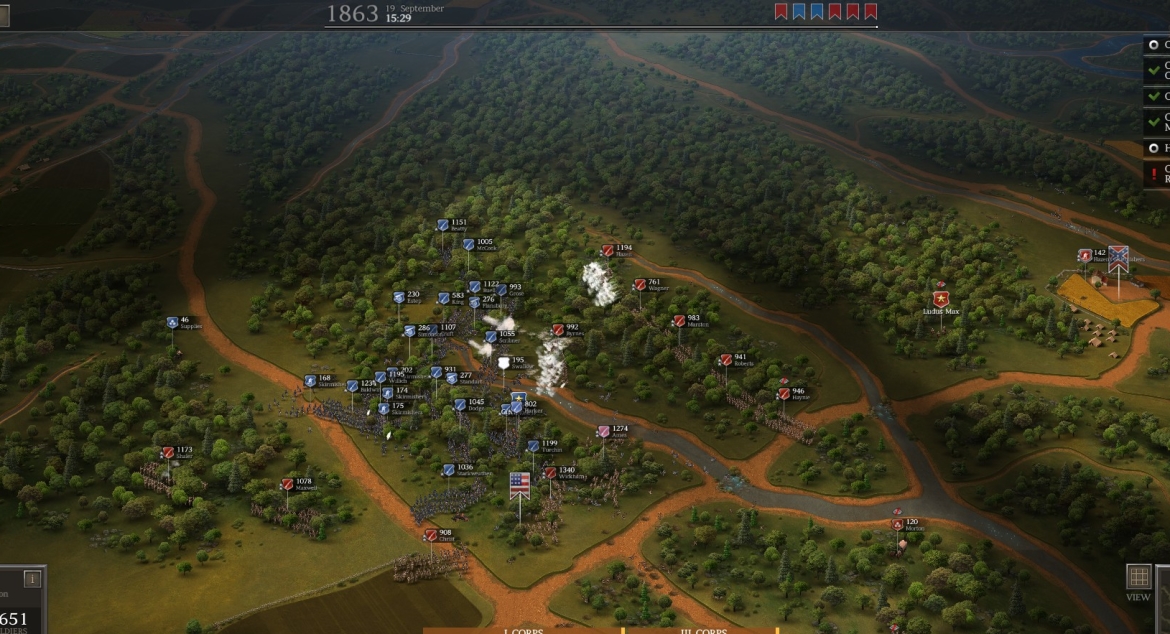 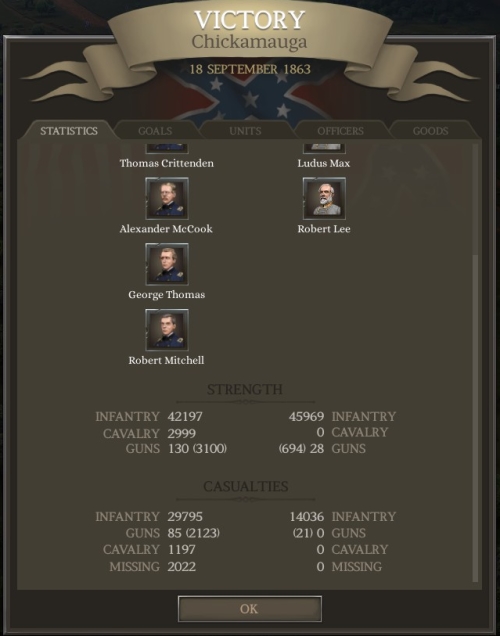 You should have been using “your” general as much as possible in the campaign, with the goal of getting him (and Albert Sidney Johnston) promoted up to Lt. General. This should happen around the Chickamauga battle.

I don’t take UGCW seriously enough to bother much about the factors that determine Union army sizes, but I have noticed that when I go for maxing Union casualties, they sometimes seem to drop to a threshold and then surge upwards unrealistically. In the battle depicted in the images above, for example, the Union army had a total estimated size of 52-58K on the eve of battle, and, despite (or because of) 30K casualties in this battle, over 130K afterwards thanks to a 100K+ addition of new forces. In UGCW, an annihilator’s work is never done!