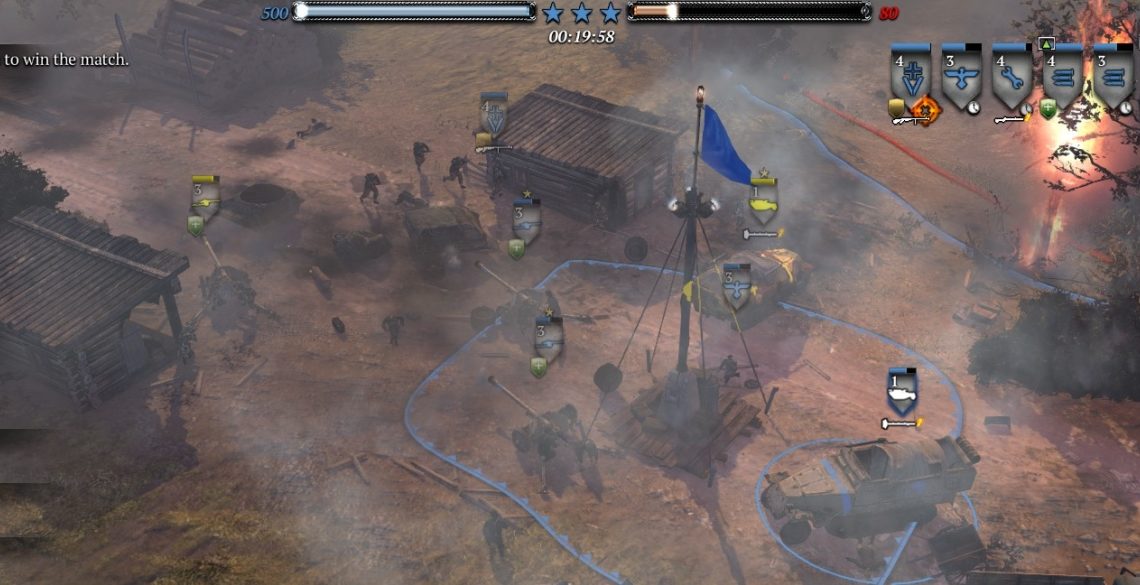 Last ToW mission is a bit too easy.

Commander: No need, in part because it will be a very brief mission, but mortar halftracks are always nice to have.

Remember the Russian mission “Retreat to the Donets?” In this mission you’re playing the German side of that map. Your CPU ally, if left to his own devices, usually fails to hold the one VP on his (right) side, but it’s pretty easy for you to lend him some squads to keep that right VP, while you hold the two left VPs, for a 13 to 15-minute victory.

Run your starting units immediately, following asap with an HMG, to cover the top VP, which will be assaulted 2-3 mins in by an M5 with .50s. Bring in another HMG to cover the territory point just below the top VP, then another plus a pio squad to cover the right VP from the field below it. When you’ve defeated the top-VP attack and hold all the points, including left muni points, going back to base, build bunker-HMGs to cover your VPs and general defense lines. Bring in another Pak to help at the top VP. Then 251s, mortar teams/halftracks, and flamer-251s at the top-left and right VPs, plus a Pak for the right VP if the mission runs that long. This should be enough to hold the Russians until they tick down to zero, although before it ends you will have to fight some M5s, penals, and at least a T-70. Note that your officer unit has significant abilities including call-in artillery—very effective on infantry—and a panzerfaust. You don’t have to build tanks for this mission.

Playing the other side: If you switch sides so that you’re playing on the right and your CPU-ally is on the left, you’ll find it’s quite a different mission. You won’t start with a Pak, so you can’t simply follow the strategy for the left-side player. In fact, you’ll need to tech up quickly for AT capability, as the Russians will use M5s with .50s to try to sweep the map, and your CPU ally, which seems to have little or no coherent programming, will simply run its squads forward suicidally (losing its starting Pak among other things) and retreat to base when at half strength. A strategy that works pretty well is to nail down the right VP and the points to the left of it with HMGs, bunker-HMGs, mines, a mortar halftrack, 3-4 Paks, command bunkers, and a flamer 251, and then assemble a team including a Pak, an HMG, a pio to build bunker-HMGs, the officer, a flamer-251, and another mortar halftrack, to hold the lower left VP. When you assist the CPU ally in this way, by holding two VPs, it will usually recover enough to hold the top left one, for a victory around 20 minutes in. Still no need to build tanks on this one.