Defend a forward base against wave after wave of Russian massed-infantry and armor attacks.

Commander: none (this is a special solo mission)

“Turtle-town” is a potentially great mission, spoiled by the devs’ incompetence and neglect.

The mission is severely unbalanced on General. The Russian swarms are too large and powerful to withstand for more than a few waves. You can win at this level only by “cheating,” that is, by letting the first wave of lightly armed conscript infantry come in and shoot ineffectually at your base, for however long you need to build up your forces.

At Captain level, the mission is still challenging but do-able without the wave 1 exploit:

Start, in the 90-second prep period, by building a semicircle of four bunker HMGs to protect your base buildings. Two cover the northern approach and one each covers the east / west approaches. These bunker HMGs will quickly scare off the first wave of conscript infantry, and in subsequent waves will help pin more advanced infantry but won’t completely stop them.

As soon as your pio squad has built the four bunkers, it should build a light mechanized company building, then bring in a 251 halftrack, and upgrade it with a flamethrower. It is essential to do this before the wave 2 assault hits. From wave 2 onward, Russian advanced infantry—penals with satchel charges (wave 4) are the worst—will get close to your bunkers and smokescreen/bypass, damage or destroy them, unless you can hit the enemy with other weapons first.

Don’t build more units than you need, because your MP rate drops a lot every time you bring in a new unit, and can quickly get so low that you have no chance of getting to 100 pop cap. It is better to let your MP allowance build up when the rate is high.

Your next two units should be 251s with flamethrowers. These are your most efficient infantry-wiping machines, and with three you can cover all the approaches. These vehicles should operate in front of your bunkers to prevent attackers from getting any closer. When one would otherwise be idle, have it join the others to speed up the killing and minimize casualties among your other units. 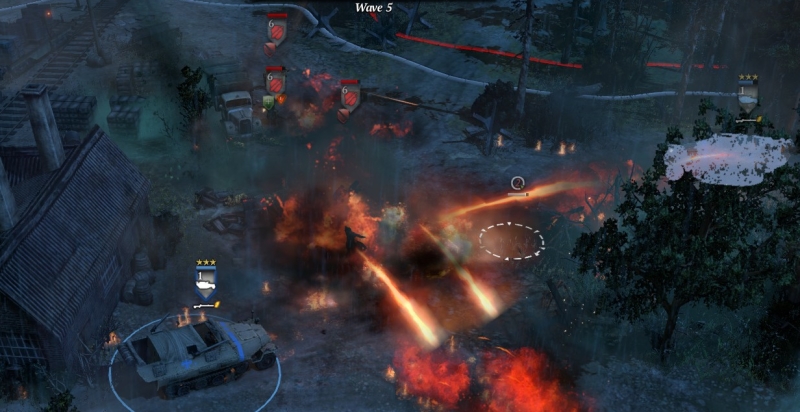 After you have your three 251s, get a Panzer IV, then a Pak-40, then another Pak-40, then a Panzer IV again. Bear in mind that in wave 4 the Russians will bring in a Zis gun so you can capture that too. Be sure to have at least three (preferably four) AT guns and one or two tanks by wave 8, when the Russians start hitting you with 4-6 tanks at a time. (Anti-tank mines would make this mission a breeze but are unavailable.)

The reason you need Panzer IVs and not just Paks is that the Russians can swarm you with T-70s, which are the nemeses of Paks in the make-believe world of this game (Pak-40s should one-shot light tanks and at range—but in COH2 the T-70s zip in from the fog of war, which starts ~10 meters from the muzzle of the Pak, then cruise around taking as many as 10 Pak hits while picking off the Pak crews with near-perfect accuracy.)

On Captain level you will get a relatively high amount of munitions, so you can use the call-in railway artillery or Stuka CAS. Neither is really worth much, although in late waves (8-10) when the Russians send in a lot of tanks, the CAS can help a little by reducing the strength of one or two of the Russian tanks before they arrive at your base.

Try to capture a Russian T-34 if you can—one of those can make all the difference. Mortars, on the other hand, don’t seem worth the MP cost.