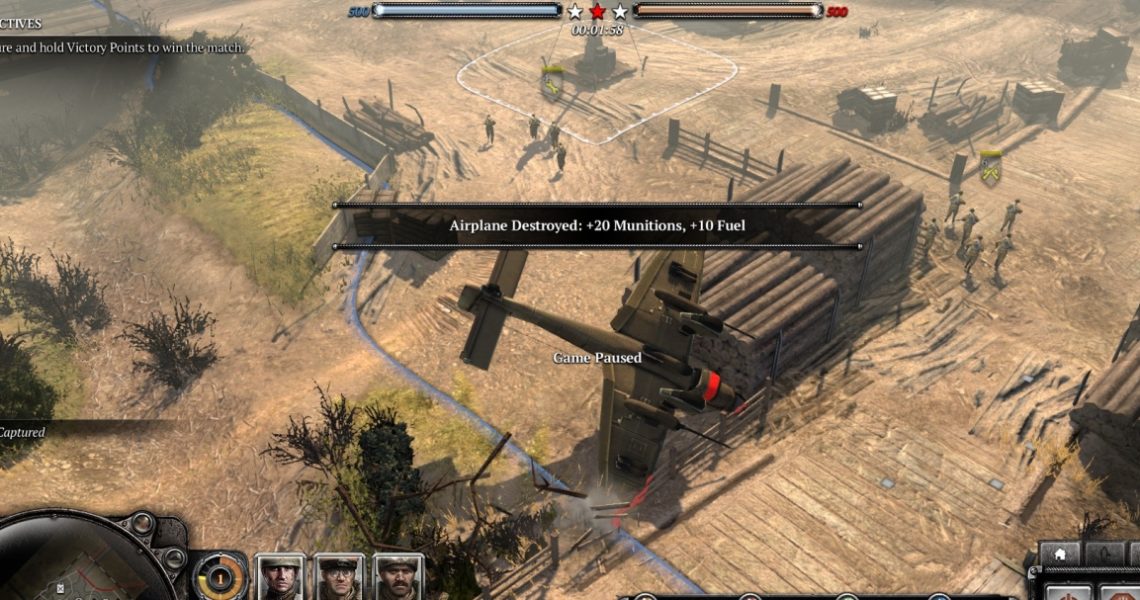 A 1943 mission that can range widely in difficulty.

Mission: Retreat to the Donets

Commander: Don’t need one, but 120mm mortars are often useful. Don’t use a commander with KV-1 call-in.

This can be very easy (14-minute win) or moderately difficult (15- to 17-minute win). It all depends on how quickly you cap VPs, how quickly the Germans swarm down from their base, and how concentrated the Germans are when they do it.

A strategy that will win for you as Russia either way is to tech for HMGs and bring in four, three to cover the general area of the right-side VPs, one to cover the left VP. Start with conservative positions, especially on the right, and move up when you can. Your right flank ultimately can cover the territory point NE of the upper-right VP—it’s always good to create a “cushion” between the enemy and your VPs.

Use your starting M5 to support VP capping by your flamer-engineers, upper right VP then left VP (leave the lower right VP to your CPU ally). Watch always for the two Paks that the Germans start with and will deploy immediately.

Your M5 can also shoot down German aircraft, which are constantly buzzing around in the sky. Note that their ground impacts can wipe or seriously damage your vehicles and squads when you shoot them down—that “feature” has not yet been fixed in my supposedly updated version of the game.

The German Stukas are there for a reason: they can do seriously damaging air strikes, e.g., destroying buildings, or even destroying your entire force if it’s densely concentrated.

After you bring in four HMGs, bring another engineer squad, tech for penals and keep bringing in those penals, upgrading with PTRSs when you can. A 120mm mortar unit can also be helpful.

Focus on holding all three VPs from the first few minutes. The German tanks should be out after 10 minutes or so, and if you want you can capture German Paks beforehand to be ready, but your CPU ally should be able to help out against armor in the short time before the German score goes to zero, and your penals have PTRSs as well as anti-vehicle bombs which are very effective. Your engineers also can lay mines.

Remember too that planting demo charges at VPs can disrupt German capping attempts even when you have no/few units there.