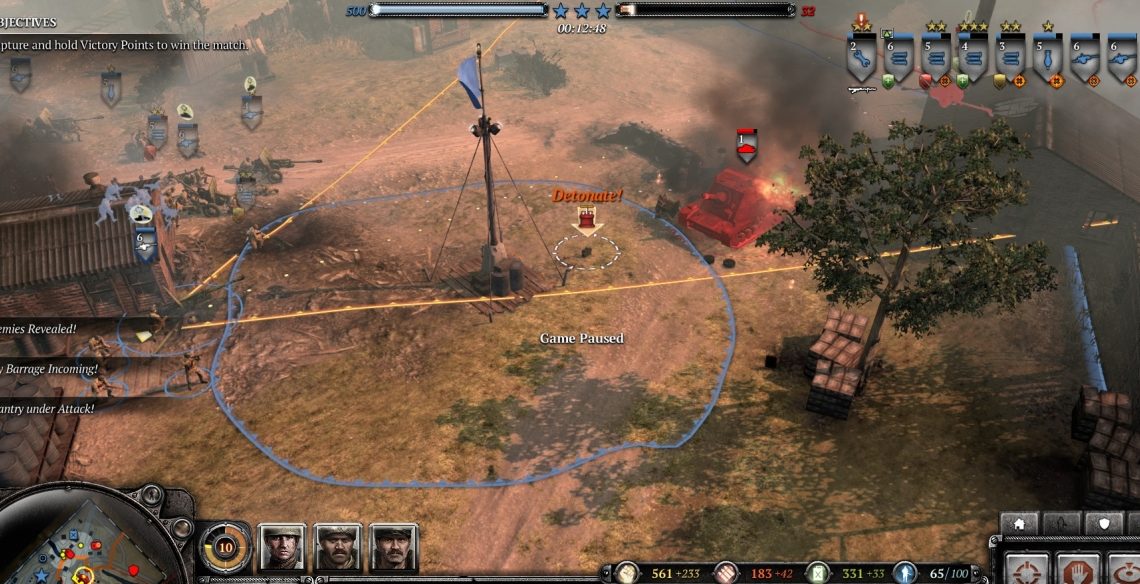 Winnable but unpleasantly difficult—don’t feel bad about skipping it

Commander: Nothing you need to win requires commander abilities, and you should win in about 13 minutes.

This one is now so unbalanced that it is may seem unwinnable. However, there is a path to victory that works much of the time–maybe all of the time if your micro-ing skills are good enough:

Essentially you are going to advance and defend an arc from E of the right VP around to the middle VP.

Send your starting mortar crew to cap the right VP, then to cap the fuel point nearby to the W; then to support the main defense line.

Use your starting engineer squad to build the tech building for HMGs / AT guns; then (upgraded with flamethrower) to cap the middle VP.

Your engineers after capping the middle VP should try to take the Key Point or get into the building with the curved roof beside it. They will take casualties. The Germans often try to build an HMG bunker a few meters SE of the key point, and your mortar crew will have to take that out asap if you can’t stop its construction. When one of your HMGs is safely in that curved-roof building, your engineers can exit, plant a demo charge at the middle VP, plant some mines at the approaches to the right VP, and stand by to recrew any decrewed weapons.

After you have four HMGs, bring in four Zis field guns asap, to cover the area between the Key Point and the right end of your defense line.

After you bring in two field guns, you can bring in a conscript squad if you have an urgent need for extra reinforcement. When you have four field guns, bring in more conscripts and upgrade them with AT-nades.

Taking that Key Point in the first few minutes will focus the German attack on you for the rest of the game, and will take the pressure off your CPU ally. There will be no lull in the German attacks, there will be lots of armor starting as early as 6 minutes in, and you will have to micro like crazy. But you can beat them 500 to 0 with this strategy. In fact, when the Germans are down to about 130 points, you can just pull back to defend only the middle and right VP. The Germans then will throw everything they have at you, including Brummbars, usually at the right VP, and they will also throw every cheat in the game at you, including the one where your AT gun crews stop being able to see their targets (use attack-ground). But if you park enough units in the targeted VP the Germans won’t be able to cap it in the short time left to them.

You’re basically just running out the clock to eke out a technical victory against a vastly superior enemy, so it won’t feel like a win. There are less broken and more fun TOW missions.