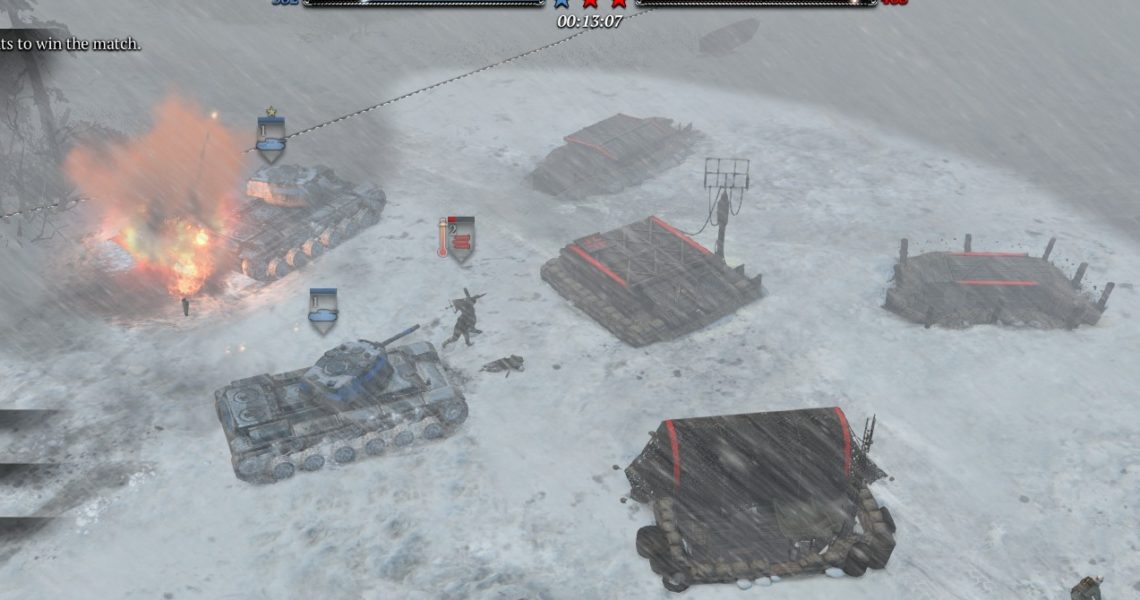 Lots of penals or lots of KV-1s will work.

Commander: Any will do. I like the one that provides 120mm mortar teams and IL-2 CAS. If you want KV-1s, do not use a commander with call-in KV-1s as that ability is broken now and when active will put KV-1s into tech level T4 (where T-34s are), greatly delaying your ability to get them.

A strategy that works for most of the 1941 Russian ToW missions is simply to tech for the penals/scout car building, bring in a scout car, put your starting engineers in it to start capping VPs and muni points, and then bring in lots of penal squads, upgrade them with PTRSs when you can, and provide them with a few trucks or scout cars for mobility/reinforcement, and a mortar team for basic indirect fire support. Your focus will be on holding three VPs and maintaining a reasonable flow of munitions points for the PTRS upgrades. You won’t need tanks and field guns, or even HMGs (though you might capture one or two German HMGs). This strategy gives you a stronger early game with more consistent map control (which makes it easier for your CPU ally to be useful) and freedom from holding fuel points, though you will need to focus in the early-game on accumulating muni points so you can upgrade your squads with PTRSs. You should win in less than 20 mins.

Alternatively there is the KV-1 strategy, which involves using your engineers and a few conscript squads to take fuel points and supply lines, and then getting three KV-1s and either using them to dominate the map or rush the German base.  You should get your first KV-1 in less than 10 mins and win in less than 25 mins. The Germans on this map seem to do a better job than usual of defending their base against your armor, so you might end up building more than three KV-1s.

You can play and win from the right-side base, using either the penals or KV-1 strategy, but the right fuel point and VP are a bit harder to reach and hold, so the game might take longer.