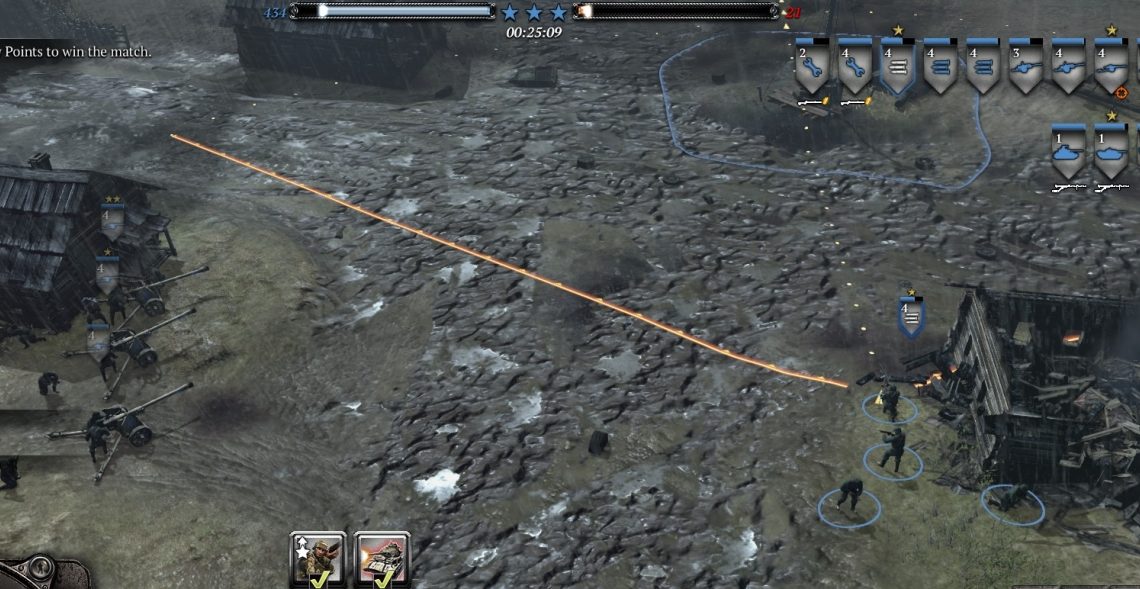 Same map as “No Retreat, No Surrender,” but of course harder now that you’re playing as Germany.

Commander: Any is fine—mortar halftracks, CAS/artillery, and Tigers are nice—but you don’t need more than the basics.

Yeah, same map, but it isn’t quite as easy for you to field Panthers, Elefants, and Tigers as it was for CPU-Germany in that previous mission. And somehow the CPU-Russia you’re facing now isn’t limited to KV-1s and T-34/76s as you were when playing as Russia before. It now also has multiple T-34/85s, and even gets a couple of ISU-152s. Also, the first Russian tanks often start showing up, in groups, after only 7 minutes, which is way before you can have the AT power to stop them.

All in all, this one is more challenging than “No Retreat, No Surrender.” The devs, who I guess wanted to pad out the mission offerings by duplicating this map, ended up neatly illustrating the core ToW single-player imbalance of Russia>>Germany.

Although victory won’t be so quick on this map, you will play this much as you played the other mission: Secure the left VP and then the middle one, the latter with lots of AT power because it will probably bear the brunt of the Russian tank onslaught, which usually hits 9-15 minutes in and includes KV-1s and T-34/85s.

Left VP: HMG and a couple of bunker-HMGs, with flamer-251 backup, for anti-infantry. Two Paks. Command bunker. Mortar when you can.

Center VP: Same as at left VP but at least 3 and preferably 4 Paks, and more bunkers.

After you have everything above, if you still have spare mp, you can bring in a Panther or a call-in Tiger.

You may get hit at the center VP around 15 minutes in, with 6 or 7 Russian tanks plus infantry support. Three Paks is not enough to handle that reliably, given the games COH2 plays with visibility, Pak responsiveness etc. If you do survive that, though, there will be a breathing space in which your two CPU-allies should manage to secure the right VP, and then the Russian points will tick down quickly.

Playing this from the right base (I haven’t tried from the middle) is more fun, and since the Russian CPU-enemy opposite is stronger, your strategy needs to be different: You want to bring in one HMG asap for the right VP, and use your starting pios and another pio to cap everything up to and including the right VP and tower, and build a bunker-HMG to cover the right tower. Use your panzerwerfer to try to kill/rout Russian infantry that try to take the central VP, assuming you don’t need it to protect the right VP. Use your pios to lay a few mines on road approaches to the right VP. Tech for Paks asap and keep bringing them in to guard the right VP until you have four of them—this will happen faster if you hold the right tower and all points back to base. Also bring in a 251 for reinforcement and then another with flamethrower to help against Russian infantry, especially Zis guns. After that you’ll use any manpower points for reinforcements, mortar teams (or mortar halftracks), or bunkers. There will be a three- or four-tank assault (KV-1s and T34/85s) from the Russians on the right VP, with support from penals, at anywhere between 6 and 11 minutes into the mission. If this happens before 8 minutes, which is about the earliest you can have three Paks in place, you probably won’t be ready enough, and you should consider pulling back and playing a longer game. Factors that may make the attack come earlier are (1) Germany holds all three VPs early, (2) you build a bunker-HMG or command bunker at the right VP in the first few minutes, and (3) you fail to lay mines around the right VP. Whatever the actual coding, it is a highly variable mission that tests your abilities every time, and although you may get irritated by the AI cheats (e.g., low visibility, penals OP, Russian units hide in un-killable positions), it is never dull. I’m not sure of the encoded timing but certainly once the Russians get below 100 points, two ISU-152s will be let loose and at least one will attack the right VP if you still hold it. By this time you should have 5 AT guns including captured Zis guns, and thus should be able to kill that ISU beast pretty quickly. Against the Russian elite infantry that will also be swarming you, it can help to have a special call-in ability such as fragmentation bombing. Anyway, by absorbing most of the big Russian tank attack—and hopefully destroying it—you will make things vastly easier for your CPU-allies, who will be building armor and should establish strong grips on the other VPs by 12-15 minutes. So you should start with control of three VPs most of the time, progressing to control all of the time, for a solid victory before 20 minutes. 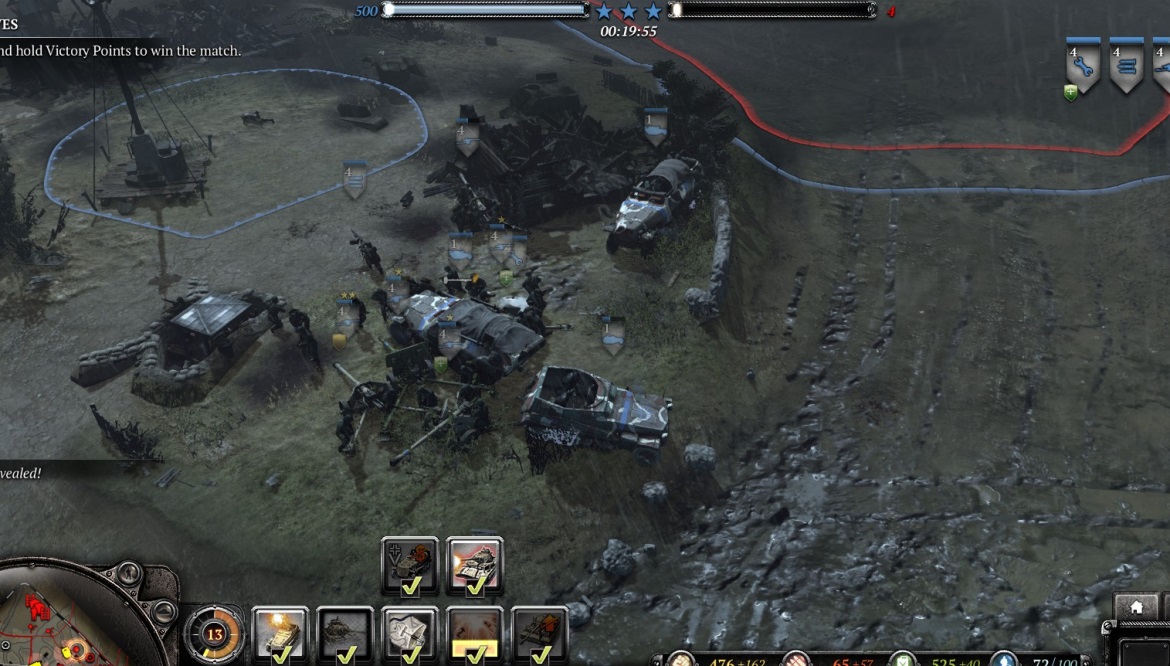