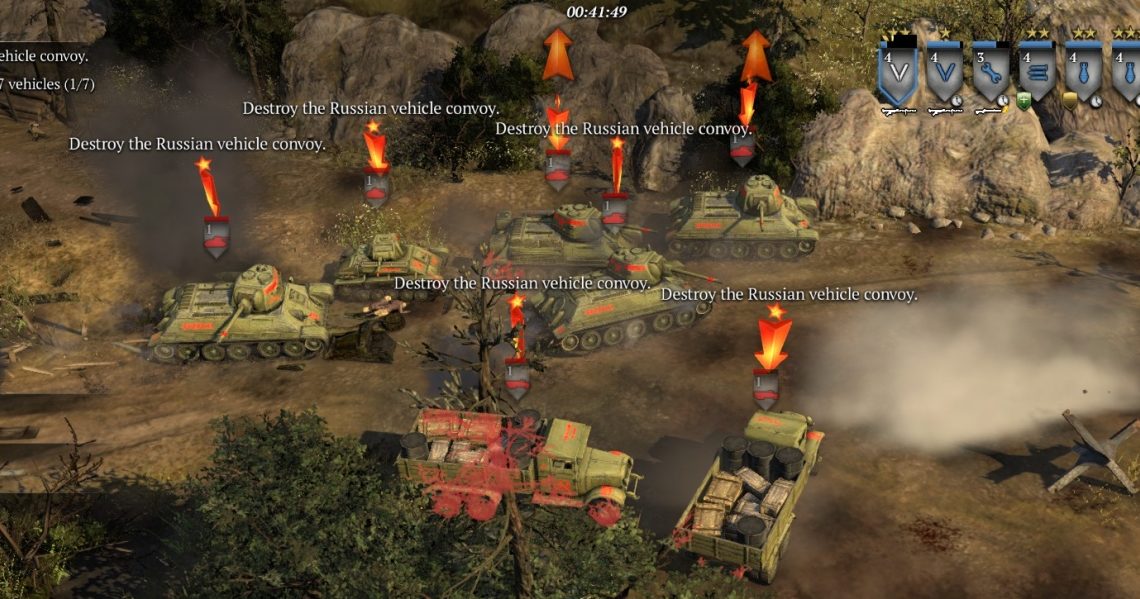 Commander: Any, but the one with the Riegel anti-tank mine is probably best. Commanders with Stuka strafing also useful.

While much longer than usual, Encirclement at Smolensk is otherwise fairly typical of the Wehrmacht missions in ToW: Your CPU ally runs around in a way that you cannot meaningfully coordinate with, and accomplishes nothing and gets annihilated again and again, so you have to carry almost the entire load, and you don’t have the resources needed to do that comfortably—especially since many of your units are unrealistically nerfed compared to Russian units. So you micro-micro-micro, use mines and bunker-HMGs to supplement your scarce manpower, and in that way get the most out of your force and win.

This mission has multiple phases.

Phase 1: Get an HMG, then two mortar squads. Send your three starting gren squads to cap the nearby territory points to the right of and above your base. Send your pioneers about 100 m to the NE of your base, where they’ll find an abandoned T-70 and can repair and man it. As the new squads are available, and after the nearby points are capped, send everyone but the tank-repairing pio squad up to the watchtower directly north of you. The battle between the Russians and your CPU ally will be underway. The Russians have many Guards Rifle squads with PTRSs. Use your HMG to suppress them and use your grenadiers (and mortars, if they arrive in time) to kill them. Keep your soft-skinned StuGs and scout car where they can contribute but aren’t too close to the overpowered Russian AT rifles. Take the watchtower. Defend against the counter-attack from a T-70 that shows up, a minute or so after you take the watchtower, from a road to the north.

Phase 2: Heal your units. Poke towards the second watchtower, and try to draw out some of the defenders so you can kill them with HMG/grens while you mortar the AT gun emplacements. If you have a recon capability you don’t need to poke—just shell them until they come out against your defenses. The Russians will have a T-70 but fortunately this is one vehicle your weakling StuGs can kill. The thing the Russians have that will give you headaches all mission is a Zis gun, I think two of them. It takes many, many mortar rounds to kill a Zis gun crew, especially when they are in a base where they can reinforce, so you may have to bring your captured T-70 in close to finish them off. Try to avoid Russian heavy artillery and Zis fire from the nearby ridge as you cap this point. Bring your mortar crews against the cliff bottom to kill the Zis gun on the ridge above them, and then the large artillery emplacements to the W. Lay four Teller mines and build two crossfiring bunker-HMGs to guard against Russian breakouts (Katyushas, T-34s, T-70s, infantry blobs) along the road leading east from the upper HQ.

Phase 3: Build your force close to 100 pop cap and make sure you have at least two Pak-40s, two mortar teams, one HMG, your three gren squads with LMGs, a flamer-251, a regular 251, and a pioneer squad. As you build up your force, bring your units west down the lower, more southern road towards the lower Russian HQ where there is also a medic station. Here the Russian force you’ll face is huge and will include several T-34s or Katyushas, several Zis guns, and probably a dozen or so squads of conscripts, shock troops, and PTRS-equipped penal troops and guards rifle squads. Build bunker-HMGs and lay mines on the road as you close in, to prevent Soviet armor from running east, past you, and attacking your base, as they will if you are not prepared. Poke with a StuG and back away or use air recon, then mortar their Zis guns, pin attacking infantry with HMGs including bunker-HMGs, wipe with LMG-equipped grens and flamer-HT, and kill their charging T-34s with your Pak-40s. Use call-in artillery or CAS if you have it. This operation will take a while and may cost you a lot of casualties. Have a 251 or command bunker close at hand for reinforcing squads. As soon as you can do so safely, take the HQ point, and destroy the base buildings. Your surviving units can heal at the HQ point which has a field hospital.

Note: If you attempt to take the upper VP first, you may lose your entire force there, while your base will be rushed from the lower VP by Russian armor/Katyushas and lots of hard-to-kill infantry. If you split your forces, there will be a strong risk that both will be annihilated. Your “CPU ally” will not be much help and will sustain damaging base rushes himself.

Phase 4: Build three or four bunker HMGs with overlapping fields of fire to guard the lower HQ/VP from the piecemeal Russian attacks and breakout attempts that will come, every few minutes, from the west. Keep two AT guns there too (there are plenty of Zis guns to man). Lay some more mines on and near the roads behind your bunkers, heading west. Build a bunker-HMG at the chokepoint where the roads come together E of the VP. Apart from two AT guns and a pio or gren squad, every other unit should head NE and then W to the northern Russian field HQ. (If Russian armor breaks out past your lower-HQ chokepoint, it will rush your base or your ally’s, so you might need to send units to deal with it.)

Phase 5: At the northern HQ do the same poke/recon and defend strategy. Again, you’ll be facing a superior force, and it’s likely you won’t have much help from your CPU ally, who often has only 2 or 3 units on the map. If one or both of your StuGs have survived up to this point and are vet 3, keep them from being killed—at that vet level they should do almost as well for you as Panzer-IVs. In any case, in this battle Paks give you more AT power than Panzers, and the latter are very vulnerable to PTRS-shooting Russian infantry.

Phase 6: Once you have taken the upper HQ/VP and killed the base buildings, you have a minute or two to prepare for the Soviet breakout attempt. Set up a bunker-HMG and lay a mine or two at the entrance road from the Russian-held sector to the upper HQ, but note that the breakout usually proceeds along the southern route past the lower HQ, so be ready to send your armor down there when the breakout starts. (If the breakout takes the northern route, you can easily run back and cut them off at the chokepoint over the creek E of the upper HQ.)

Phase 7: As soon as the breakout attempt is about to begin, move your entire force to the main bottleneck spot on the road E of the lower VP. You should have at least a few mines laid on the road leading east to that bottleneck, plus bunker-HMGs to slow tanks/trucks and pin infantry. Position your force at that bottleneck point. Eventually the blob of T-34s and trucks should reach you but after having been depleted by mines. After one or two joint salvoes from your Paks, plus any artillery or CAS you now want to call in, you should have killed the requisite seven vehicles to end the mission.