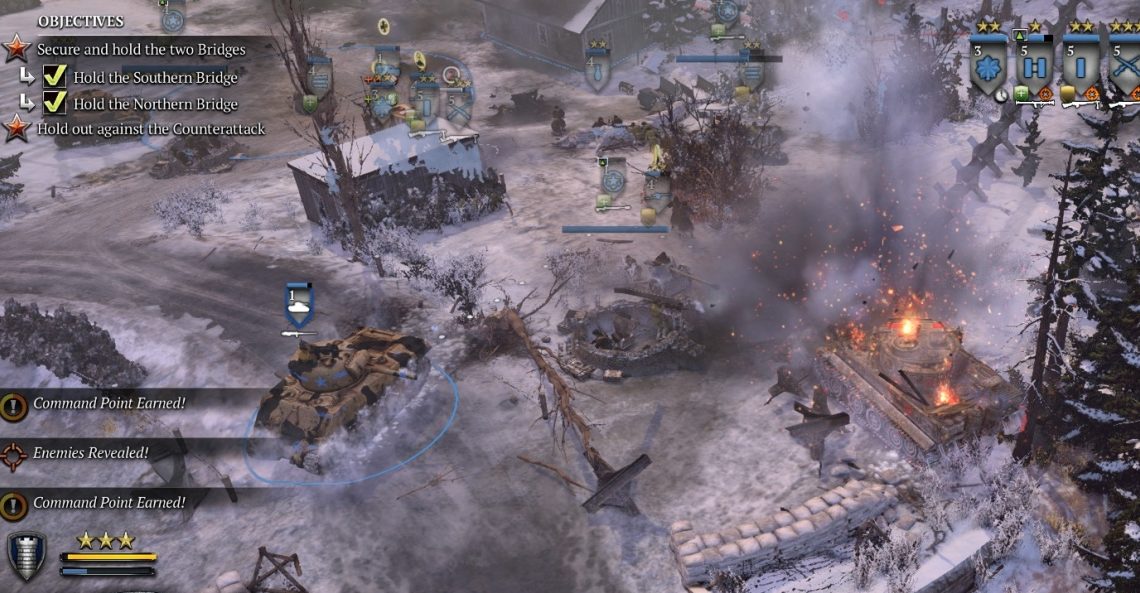 There are four parts or phases to the challenging Ouren mission: 1. Charge across a bridge at the south of the town and take a territory point just north of the bridge. 2. Heal up and prep defenses of that point (TTs, FPs, crew abandoned weapons). 3. Send a small, mobile force (e.g., a Stuart) to the point at the north bridge and, with artillery support, take it. 4. Defend against multiple waves of infantry and armor attacks on the point at the south bridge.

To win gold, you have to succeed in taking the two bridge points and then in defending the south bridge point from German capture.

Here is a more detailed description, for schreck-upgraded Rangers which are ideal for this mission. If you use another company instead, try to have comparable firepower, and get a Sherman instead of a Stuart.

First phase (take the point above the south bridge):

Your Fox Co. should be vet-2 in which case you start with two Ranger squads, an RE squad, and a Stuart tank. At the start of the mission, immediately take the nearby point NW of your base (a half-strength German volksgren squad is there), while adding two or three more Ranger squads (one squad can be the Lt. squad) for your main attack. The next point up the map is at the south side of Ouren’s south bridge. An HMG and a volksgren squad guard it, and the point is covered by a mortar team in the point to the north of the bridge. There is also a German MG at the very north end of the bridge, plus a Pak, panzerfusiliers, obersoldaten, and fallschirmjaegers, and the mortar team, within the point just north of the bridge, which is your main goal in this phase.

When you’re ready, run your Stuart straight at the point below the bridge and cross the bridge without slowing. Head towards the point above the bridge. Rangers follow. When the Stuart passes the HMG and volksgrens at the point below the bridge, they will rout. Ditto for the HMG at the north end of the bridge. So your infantry have a clear path to the point above the bridge. Micro as needed to destroy that large German infantry force as well as other infantry units that counter-attack from the nearby fuel point. Keep your Stuart alive—it’s agile. Put a Ranger squad in the building on the north edge of this point. Cap the point. This is your new forward base (FB). Use your RE squad to crew an abandoned MG34 and put it in the small building at the south edge of the FB. Use another RE squad to re-crew the mortar.

Bring in an ambulance and at least three more RE squads, then more Rangers till you max your pop cap. Use your ambulance to heal/reinforce wounded squads.

Use your RE squads to lay TTs to block armor thrusts from E, N, and W—and down to the river if possible. With mortar/artillery support, take out the HMG at the nearby fuel point. Move three or four full strength Ranger squads into the fuel point area, destroying all German units there, demolishing the base building, capping the point, and laying demo charges in the point and on approach paths from N and E.

There is a medium-sized building about 50 m WNW of your FB. Use schrecks or tank fire to reduce the building integrity so that one or two shots will collapse it—then leave it for German squads to occupy later during the main attack.

Crew another abandoned MG34 and place it behind your line of TTs against the north face of the house at the N edge of your FB, to cover German attacks from the fuel point area.

Bring in a Major and post him at the S edge of the FB to serve as a retreat point. This is really important.

When there are only a few minutes left before the German attack starts, run your Stuart (or, if you have no tank, two or three Ranger squads) to the point to the WNW of your FB. Take that point. Then run the tank as quickly as possible to the point at the south end of the north bridge. Use tank fire or artillery to kill any nearby German units (allied units across the river will help). When safe to do so, disembark crew to cap the point. When the point is capped, re-embark the crew, and head back to your FB the way you came. Do not linger or Paks will find you.

Lt. squad in building at the N edge of the FB. Four Ranger squads just north of that, behind your TTs and beside your HMG, to handle attacks from N. Remaining Ranger squads cover W and E approaches, switching on schrecks when needed. RE squads can crew the decrewed Pak at the FB and crew FPs. Stuart sits in the center to handle any infantry threat that starts to come close.

If you micro your Rangers and other units (pausing frequently) you can destroy just about any threat coming from any direction.