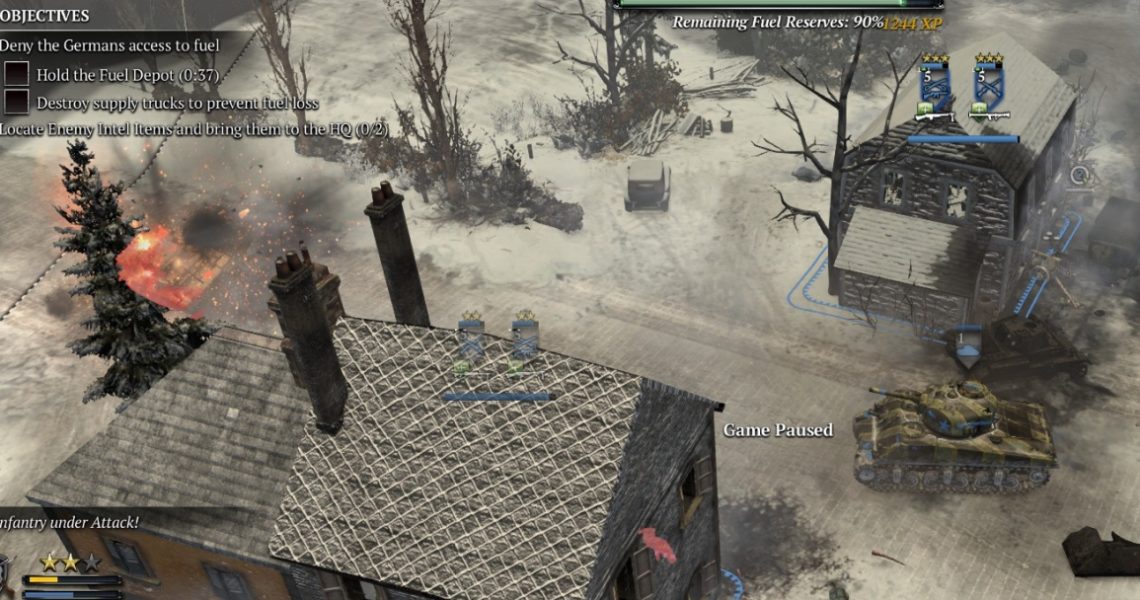 The object here is to stop fuel trucks from leaving a depot and then capture the depot and hold it for a few minutes against furious counterattacks.

It’s a moderately difficult mission if you want to get the gold medal. Gold requires killing all fuel trucks but one, i.e., you may let the first one go but you must kill all the others. (It is possible to stop even the first one, but that cannot be done every time.)

To achieve this, you have to move immediately north with your starting units and defeat the volksgren and panzerfusilier squads at the nearest point to cap it. (Use your starting RE squad to take a munitions cache about 60 m NNW of your base, and then take a similar cache at the next point.) You must then move without delaying more than a minute or two to the next point, where you will deal with a panzerfusilier squad, a fallschirmjaeger squad, a Luchs light tank, and sometimes a 75mm infantry support weapon—not easy. Then you’ll have to move north and get in the way of the second truck, killing it before it leaves the map. (Watch the map from the start to see the truck route and plan your intercept.) Don’t go north of the river, as there are too many other units there.

Soon a third truck will come along, now guarded by a Luchs or a Puma or a flak-HT, and you’ll have to deal with both vehicles. As you do this, you need to build up your forces. Eventually you’ll move on the truck depot, use artillery/mortars on the HMG, Pak, and maybe infantry support gun guarding the depot point, then put LMG- and schreck/bazooka-equipped squads in buildings around the depot point, then take the point, and finally hold it for a couple of minutes against infantry + Luchs/Puma attacks.

Only bazooka/schreck-carrying Rangers or a vetted Baker Co. can manage this, the latter with difficulty because of the lack of anti-vehicle power early on (Baker must give its squads bazookas asap if it doesn’t start with a tank or TD). Whichever company you choose, having decent artillery and tank support is pretty much always necessary.

Note that, even before you take the depot/fuel point, but after you have taken the point closest to it, the CPU will tell you that German units are scrambling to defend the fuel point—and indeed it will keep creating German units, mostly Luchs tanks, Pumas, scout cars, fallschirmjaegers and panzerfusiliers. These units will just keep flowing in from off-map on their own or accompanying the outgoing fuel trucks. If you’re in position to wipe them all, you can build up a lot of experience points by just sitting there and doing that for a while, instead of taking the depot. You can also accumulate a lot of casualties.