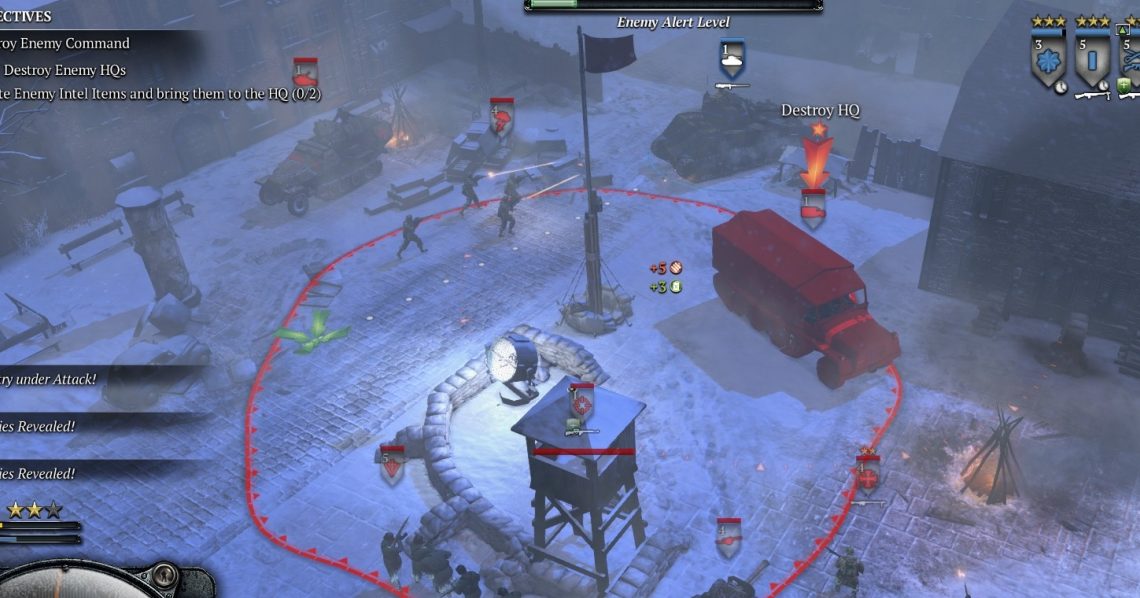 On this mission, if your units enter the beams of the spooky infrared halftracks (IRHTs) or use indirect (mortar, artillery) fire against them, the German alert level rises and the Germans become more numerous and aggressive. If the alert level goes all the way up (the UI provides a helpful meter of enemy alertness), the command trucks will flee the area and you’ll fail the mission. There are three command trucks and you need to kill them to finish the mission. If you kill all 8 IRHTs by the time you kill all the command trucks, you also get the gold medal.

Note that you can safely use artillery on everything else, even Fox Co.’s 155mm rounds on a target 20 meters away from an IRHT—which makes no sense, but that’s COH2.

You can win this mission using almost any company because there is no real time limit, so you can arm your troops as needed. Able Co. (airborne) is the exception—do not use—because their paradrops raise the German alert level.

There are different ways to accomplish the mission but I like to:

Beware the Pak-43 emplacement about 100 meters WNW from the NE command truck—though it’s easy to decrew if you have BAR or LMG-equipped infantry, or just use artillery.

Beware also the behemoth tank-destroyer (Tiger Ausf B) positioned to the east of the NW command point—it can kill vehicles and infantry through buildings and at long range, including in the NE command truck area.

In case it’s not obvious, you kill IRHTs by approaching them from the side or rear, out of their beams, and hitting them with AT guns, schrecks, or bazookas. You can hit IRHTs with tank or AT fire through wooden fencing, e.g., at the northernmost VP—but again, you must be behind them, out of their beams.