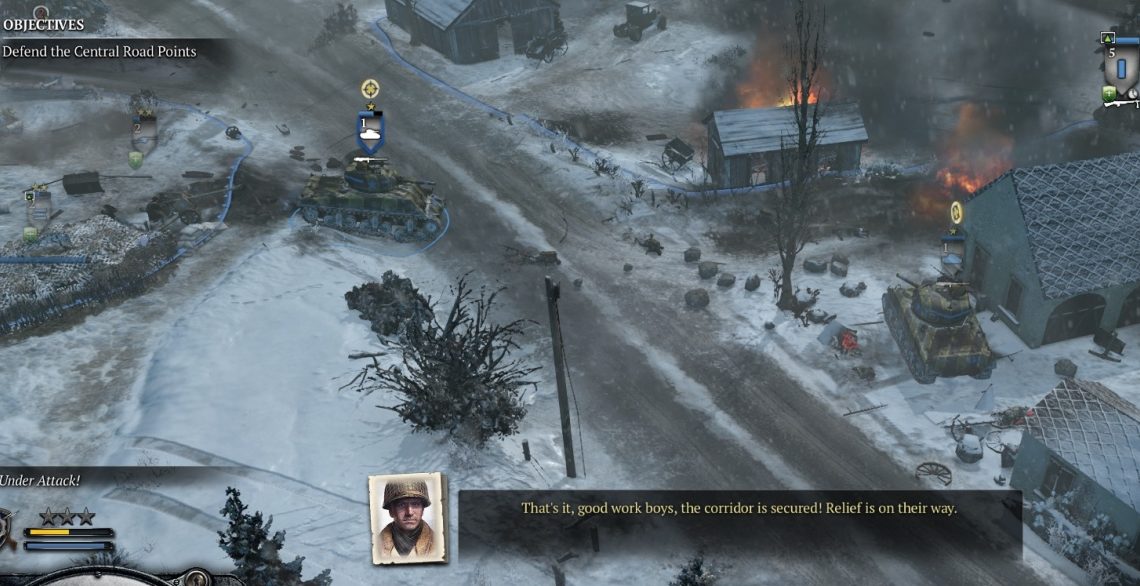 You’ll do this mission with Baker Co., unless Baker is not on your roster, in which case you’ll have to do it with Fox Co.

Either way, you start with two Shermans and one of the little M8 armored cars, plus two squads (cav rifle or Rangers).

Immediately switch your Shermans to fire high-explosive shells and without delay send them and the M8 to the first point on the road. The German infantry there cannot seriously harm any of your three vehicles so blast away, and have your infantry follow closely to capture the point and grab any ammo boxes lying around. Repeat this for all four of the territory points along the road to the top of the map. To speed things up at the first three points, have your tanks wipe most of the defenders and then move on, leaving the survivors to be mopped up by your following infantry and the M8. Note that at the third and fourth points the Germans will have both Paks and AT-nading panzerfusiliers, so you will have to do lots of micro, your vehicles will sustain some damage, and you will have to spend a bit of time repairing them. Use the M8 in these firefights in a way that makes it less of a target, as it is far less robust than the Shermans. The Shermans can kill a Pak crew pretty easily—especially when working together—by running behind or beside the gun and hitting the crew with their main-gun HE rounds. Shermans can kill panzerfusiliers or other elite infantry by kiting but also just by coming directly up to them and blasting away with HE, then repairing the AT-nade damage later.

If you’re careful not to waste time, you will cap the upper point with 2-3 minutes left on the timer. Getting the gold medal on this mission means winning the mission while also finishing this first phase quickly—I’m not sure of the cutoff but doing it before the timer hits 2 minutes is not especially difficult and will definitely get you the gold.

After that you enter a defensive phase in which you must keep the Germans from retaking either of the two middle territory points. Here you just need to provide a basic level of AT power (Shermans firing AP, captured Paks) and anti-infantry power (Shermans firing HE and upgraded with top-MGs, M8, captured HMG, halftrack with cav rifle squads) at the two VPs. Typically you’ll face 2-3 attacks by groups including Panzer II “Luchs” tanks, scout cars, and Pumas—any of which a Sherman or a couple of Paks can handle—plus infantry. Beware that once in a while, the Germans will come at these VPs from unusual “advantaged” locations, e.g., between buildings, where they can shoot your units but your units can’t see them to shoot back. Also look out for German fallschirmjaeger squads, which fire automatic weapons (FG42s) and are deadly.

Don’t clog the main road—the ambulances will need to pass.

Don’t put your infantry in buildings near the territory points if German vehicles can approach in a way that allows them to blast those buildings before your Shermans can come to the rescue. In COH2 the AI enemy always “sees” you long before you can see it.

Watch out for the icy ditch across the road from the lower VP. Somehow (?) it is extremely deep and your tank will sink and be destroyed if it runs onto it.

When the defensive phase begins, you get an RE squad. Use it to build an FP/HMG between buildings covering the narrow road from the W to the lower VP.

There is always a bonus mission such as killing a disabled tank, collecting “intel,” or assassinating an officer. Achieving these gives you a 10 percent bonus on experience points gained in the mission. The tank and officer-assassination missions are pretty easy, especially with the help of artillery. The intel mission is obviously misconceived, requiring you to run all over the map to find three separate items, kill their defenders, and carry them back using three separate squads—you generally won’t have the time to do this during the very short (5 mins?) defensive phase of this mission.

It’s routine to finish this mission with >40 veterancy points and zero or near-zero casualties.