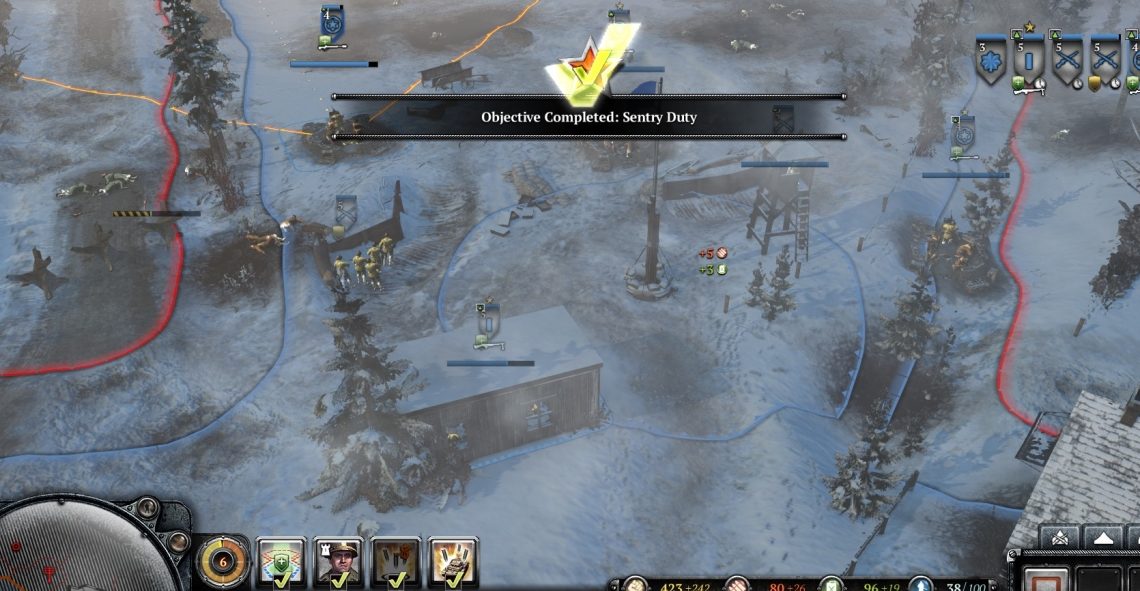 Part 1 (with Capt. Derby): You’re at a US forward operating base in Belgium and have to move some troops to sentry duty a short distance from the base. You will be instructed on how to call in rear echelon (RE) squads, make firing positions (FPs), lay tank traps (TTs) and so on. You should follow the prompts, but remember (1) the Germans are about to attack, marking the start of the Battle of the Bulge, so you will need all the firepower you can muster; (2) you don’t have to be limited to calling in a couple of RE squads; I suggest bringing in a lieutenant and more RE squads, and making more FPs; (3) the German attack will begin with an artillery bombardment on your position, which may destroy some of your FPs and possibly the small building near your trenches.

Part 2 (with Capt. Vastano): Regular army troops in a Belgian village are fighting Germans. Use your HMGs and your riflemen’s grenades to quickly terminate the Germans. You will bring in one or two paratroop squads but they will mainly be used to go up a nearby hillside to cap a radio tower. When you do that, you’ll face at least half a dozen German squads including two fallschirmjaeger squads firing submachine guns. At least one of your paratroop squads should be upgraded with Thompsons. Also bring at least one HMG. Proceed carefully and with HMG support and you should get the job done, although the fallschirmjaegers will take a toll.

Part 3: At a forward base SE of the previously depicted village you will equip one of three rifleman squads with a BAR and move forward, supported by two Stuarts and a Wolverine tank destroyer, to the front line where other US units are fighting German infantry (mostly volksgrens). Your task is to advance to the village, wiping German units as you go, and hold the corridor so US troops trapped in the village can be evacuated. Here again, you can call in other squads to help, including RE squads (to help repair your armor), AT guns, and cavalry riflemen in M3 halftracks. The key to success here is to proceed very carefully—don’t send your armor straight up to the village, but hang at the front line for a while first and let the Germans come to you. Take your time, use BAR-equipped mobile infantry in M3s to handle German infantry, and use your tanks to deal with German flak halftracks and Luchs tanks. Do a lot of poke-shoot-and-retreat. There will be Panzer IVs on the way to the village, and then again coming from both sides of the road when you’ve almost got the evacuation finished. Do it right and you won’t lose any of your vehicles. Do it wrong and you will lose most or all of your force. Remember that the real-life Battle of the Bulge remains the costliest battle ever fought by the US military, which suffered about 90,000 casualties in just a few weeks of fighting.