Move all your forces to the far lower left corner of the map and then run up the hill on the far left edge of the map. It is easy to flank the Pak and German infantry there. Then run across the German line from left to right until you’ve killed all the units on that front line. Reinforce your squads, using the halftrack.

If you’re using Rangers on this mission, and intend to use them for the final assault, you should now bring in more Ranger squads. You will need them immediately at the start of the final assault. Bring in as many as you can while otherwise conducting this mission normally.

Use the passing US planes to spot for your artillery/CAS to de-crew the three artillery pieces at the fuel point to the north. Don’t hit the guns directly—try for a shot that kills the crew but spares the gun, so you can use it later. Not essential, but nice to have.

If you prefer, you can rush that point with your squads, but you will take a lot of casualties from the Puma, HMGs, fallschirmjaegers, obersoldaten, Paks, and other German units there. Artillery should do most of the work for you on all four of these Siegfried Line missions.

Take the AT gun and move it up 20 meters or so, until it’s just in range of the Panzer IV across the field. Leave it to kill that tank automatically. The rest of your force sweeps left to take the first territory point with help from an immediate artillery salvo, and then, when healed/reinforced the point just ahead of that across the ditch. Grab Paks and other weapons there. Use your tanks on the lower side of the barriers for support as your infantry moves across from W to E. Use the Paks on the Luchs that appears. Use passing US planes to spot for your artillery as needed.

Use the US aircraft overhead to spot the two German AA emplacements, one on the right and one on the left of the German position. When you spot each one, pause and call in artillery on that position. If you’re impatient—the planes sometimes take a long time to fly the route over the left emplacement—you can send a tank down to that left emplacement to spot for artillery: the first salvo can take out the Pak guarding the point (at which point you should retreat your tank), the next one the AA emplacement.

I prefer to use Fox (Rangers) or Baker (cav rifles in halftracks). Rangers are easiest. They start by running to the fuel point where they de-crewed the artillery pieces before. They should stand ready to deal with the giant German infantry-plus-tank attack that will quickly develop from the east. Infantry come first so keep schrecks stowed until the first Panzer appears—soon there will be a King Tiger. After that, heal up and reinforce, and get as many Ranger squads together as possible, with whatever else you have that can kill infantry. Use captured artillery and your own call-in artillery to kill everything to the east at the base of the big German-held hill, especially HMGs in bunkers. You can use passing planes to spot for artillery to wipe German units on the hilltop, but you don’t really need to do that. Nor do you need tanks. Once you’ve wiped all German armor and infantry at the base of the hill, just take your entire fighting force and run them up the road to the hilltop. Once they reach the top they will start killing German units, many of which will flee. But the object is really to kill the two bunkers, and that will take only a few seconds when the Rangers are using their schrecks. A few seconds after the bunkers are destroyed the fighting will stop with a German surrender. Baker Co. will have a harder time with this, and will really have to scramble to put together the AT power to survive the German tank onslaught. But once German armor and HMGs are cleared away, Baker can just go up the hill with a few halftracks full of cav riflemen, plus a Sherman and/or Wolverine to kill the bunkers. 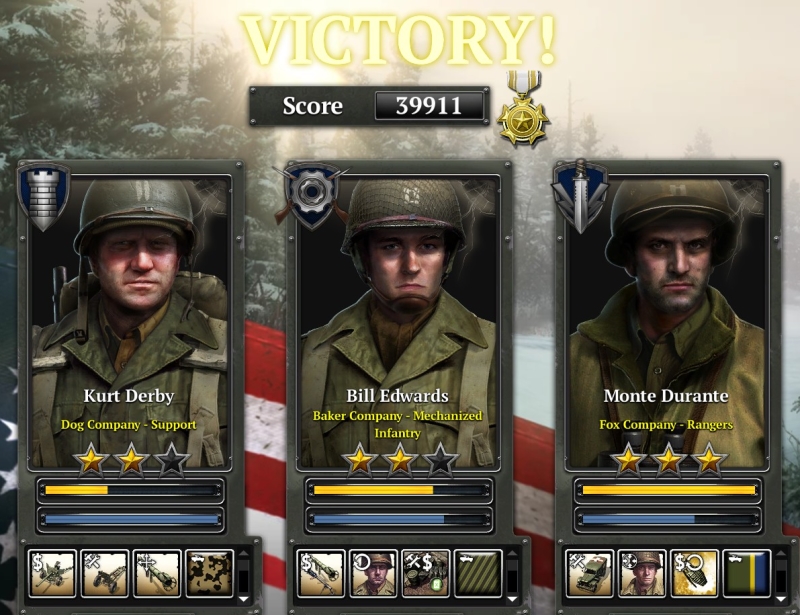